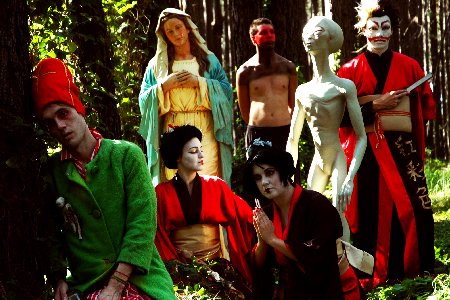 One of the more unique acts to be gracing the Australian music circuit at the moment, The Red Paintings are a 5 piece experimental/art rock band out of Brisbane.  Their performance reputation has overtaken their music – on stage the members dress up in costumes (usually Geisha outfits but occasionally alien costumes), they have canvasses at the front of the stage and members of the audience are able to paint during the performance if they feel inspired, and I believe on one tour the band had human canvasses. They often have a lot of religious iconography as props on stage, though I think on their Destroy the Robots tour they had robots as well.  I know that during that tour they brought with them a giant robot and would take pictures of it in different places around Australia and the world too.

The band have been around since 1999 but they first gained national attention with their song ‘Rain’ which was released in 2004.  Since then the band have gained a small but loyal following and recently supported the Dresden Dolls on their Australian tour.  I saw The Red Paintings a few years back and their live shows are fantastic – it’s great to see a band that puts so much thought and effort into their performances.  Their latest EP Destroy the Robots was a disappointing effort – I felt the band were attempting to craft a more mainstream sound and it didn’t work at all.  Soon the band split with their label Modern Music which is an imprint of Sony/BMG and the band are back to being a completely independent act.

The Red Paintings are touring the United States at the moment before they head to London in November. Check their MySpace page for tour dates.