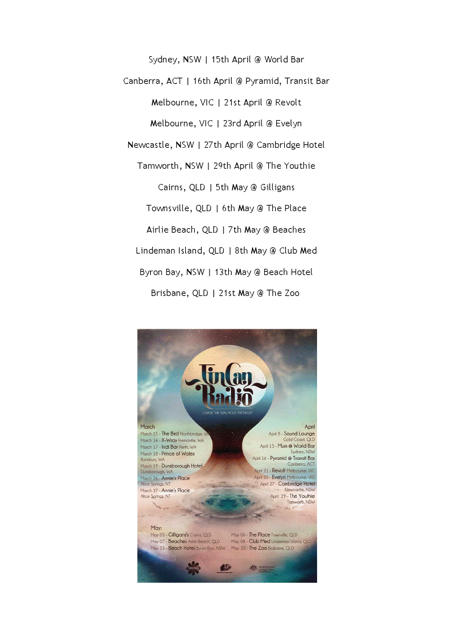 The band’s first single way back in 2010 ‘Days to Dust’ was a rather impressive Indie-Dance-Rock affair, which set the tone of things to come from this Brisbane 5 piece.
The new single ‘Skeletons’ pushes the band further into an electronic tide, with more integrated synth lines, and tight kicking production by producer Timeshare (Hungary kids of Hungary). Skeletons is somewhat reminiscent of a Two Door Cinema Club song we’ve never heard, that is, until we’re taken on a life changing halftime dubstep journey of doom, with wobbling synth, female vocal cuts, and effected beats, then coming back around to build into the rapid disco vibe! *Wipes sweat from brow.

It’s all very… Now. Or at least you can hear the bands direct influences of the past year or so. The ideas are cool, but the band are yet to create an authentic and unique sound. I like it, but I’m not hooked. Perhaps checking out the live show will change my mind…

You can catch the Tin Can Radio show, supporting their LP release ‘Chase the sun, hold the night’ around the country through April and May. http://tincanradio.bandcamp.com/track/skeletons