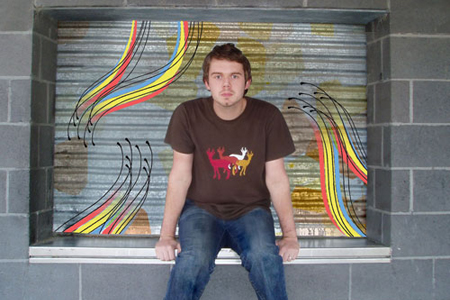 So many of my favourite solo artists go by mysterious chat room style pseudonyms, as though a mere first name and surname would undersell their creativity. I get a real kick out of knowing that beneath the expansive-sounding Caribou, Destroyer, or Melbourne’s Mountains in the Sky, is an incredible musician tinkering away in a bedroom studio. Melbourne’s “Sample tronica” artist Tim Shiel trades under the name Faux Pas, and he released a pretty ace album called Entropy Begins At Home earlier this year.

Success and recognition began at home too, as he’s received lots of support from community radio stations around the country; scoring prestigious Album of the Week accolades at Sydney’s FBi 94.5. Faux Pas will be globetrotting around Europe for the rest of the year though, where I imagine he’ll be scouring the record racks in flea markets to add to the seriously impressive catalogue of noises you can already hear in his music. But although the music of Faux Pas is constructed of painstaking layers, there’s always a thread of sound that anyone would be in to:  such as drum and bass, tribal world music, sparkling squelches and the odd simmering glitch or two.

I love the way each tune creates a narrative of sound. This one starts off harmlessly plucky and then blooms into something kind of merry, via a great sample from The Free Design: