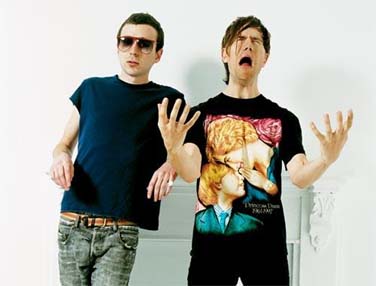 “My, how you’ve grown!” muses The Presets’ frontman Julian Hamilton on ‘Talk Like That’, one of many standout tracks from the duo’s second release, Apocalypso. You’d be forgiven for thinking that he’s talking to himself. After all, The Presets have transformed from underground synth junkies into full-blown popstars in a ridiculously short amount of time. When their debut record, Beams, dropped back in 2005, they signalled in the beginning of the Modular Era, which would see thousands of kids squeeze into tight jeans and bright coloured tshirts and go absolutely apeshit for dance rock. But the Presets were always way ahead of the pack, leading the way with their increasingly dark electro tunes that would eventually become the soundtrack to the New Rave generation. And with hits like ‘Are You The One?’, ‘Girl And the Sea’ and ‘I Go Hard I Go Home’ being dropped in every single club in Australia (as well as abroad), it was only a matter of time before this band went into overdrive.

Fast-forward to last Friday night. It’s the eve of Apocalypso‘s release, and I’m at the Civic Hotel in Sydney CBD. Myspace, in their infinite wisdom, have decided to cash in on the Presets phenomenon and offer a secret show to the public, free of charge. The atmosphere is electric, especially with close to 600 people trying to muscle their way into the tiny downstairs bar which will only accommodate half of them. The general rule of thumb is “Unless you sweat, it ain’t Presets”, and tonight is no exception. Julian and Kim hit the stage and proceed to frazzle our minds and melt our faces off, with a non-stop set which showcases new and old material.

New tracks like the Depeche Mode meets Tears For Fears ‘This Boy’s In Love’ are fantastic, and as for ‘My People’, well you can probably imagine how that went down. What’s astounding is how many diehard fans this two piece have amassed in a few short years. They’re the ones who know every word to obscure tracks off early EPs as well as brand new tunes that haven’t even come out yet. Julian’s deadpan voice is as spine-tinglingly cold as ever, as he spits venom into every lyric. And then there’s all the bells and whistles, the sequencers, keyboards, samplers and vocal fx that turn this into a truly remarkable evening. When you hear hundreds of people clapping in syncopated time in ‘Are You The One?’, you know this band are destined for big things.

Having heard Apocalypso, I can safely say it’s nothing short of brilliant. There’s almost a savage nature to the songs, as they unwind into perfect little electro nuggets. Almost every song comes ready to storm the dancefloor, and there’s some really fantastic musicianship showing through beneath the throbbing bass and 4/4 drumbeats. The Presets are Conservatorium of Music graduates, and it shows. Each track is so nuanced that it reveals more with every listen. It’s a fine achievement from one of our country’s finest bands. C’mon kids, let’s go raving!