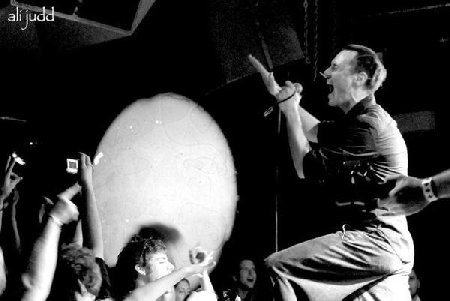 Dead Letter Circus are one of those lucky bands who have already worked out what their signature sound is going to be, even before they’ve released a full-length album. However, they are in danger of recycling the same tones and sounds, particularly if they don’t soon switch off the delay pedal. People like familiarity, but not when it becomes repetitiveness.

Having said that, ‘Reaction’ is DLC’s most solid song to date, particularly for vocalist Kim Benzie who’s stripped back the stratospheric high notes that were abundant on the group’s debut EP but which he consistently struggled to hit live. (I hate to say it, but that’s what you get when you use Auto-Tune.) It’s a more natural range for Kim, allowing him not only to add some well-placed harmonies but make his vocals far more rhythmic and laconic, creating an infectious counterpoint to the frenetic instrumentation that’s sitting underneath.

It’s not a deviation from the EP, but more of a solidification of their musical style. ‘Reaction’ is a promising sign of things to come for these Brisbane boys.