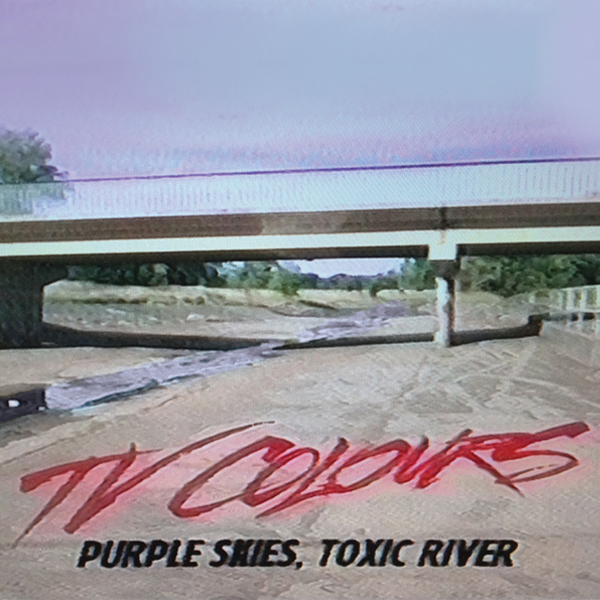 TV Colours is Bobby Kill – or Robin Mukerjee, to his mum. A key player in the tight-knit Canberra scene, he’s worked with Danger Beach and the sorely-missed Assassins 88.  Members of both those bands now play with him, along with the enigmatically named ‘Catfish’ from The Fighting League. Bobby’s debut album was 6 years in the making, with two versions ditched along the way, but it was well worth the wait – there’s not a dud on it. Packing 15 songs into 45 minutes, Purple Skies, Toxic River blasts you with its serrated guitars and petulant vocals, which sound like someone shouting at you from inside a padded cell.

Purple Skies is back-to-back impeccable garage jams in the style of Hüsker Dü. In fact, Bobby’s got a penchant for all kinds of late-70s Americana: mullets, muscle shirts and Mustangs – just check out his Tumblr. When the album isn’t gouging your ears with overdrive, it drifts into moody instrumental sections that sound like the score to a John Carpenter film.

While TV Colours’ sound is meticulously crafted, his major asset is an ability to write hooks that are tight as fuck. The guy’s devotion to melody is so complete there’s even a Beach Boys reference on the album, with a track entitled ‘I Soon Found Out My Lonely Life Wasn’t So Pretty’.

The first single off Purple Skies was the punchy ‘Beverly’. It caused immediate excitement, even copping a Pitchfork review within a few days of its release. Album opener ‘the Neighbourhood’ is now streaming on Soundcloud. It’s a furious number that reeks of alienation and teenage angst. A thoroughgoing introduction, the song walks through pretty much all the album’s aesthetic devices without losing any of Kill’s trademark concision. The lead-in riff sounds like early Sonic Youth, with its clear tones and pretty but slightly off-kilter chords, and there’s a frenetic verse that’s gradually slowed down and torn apart by a gut-wrenching guitar solo. The track closes with a dark synth passage that has the same mixture of parody and dread as a David Lynch creation – a fitting coda for a song raging against the deadening drag of suburbia.