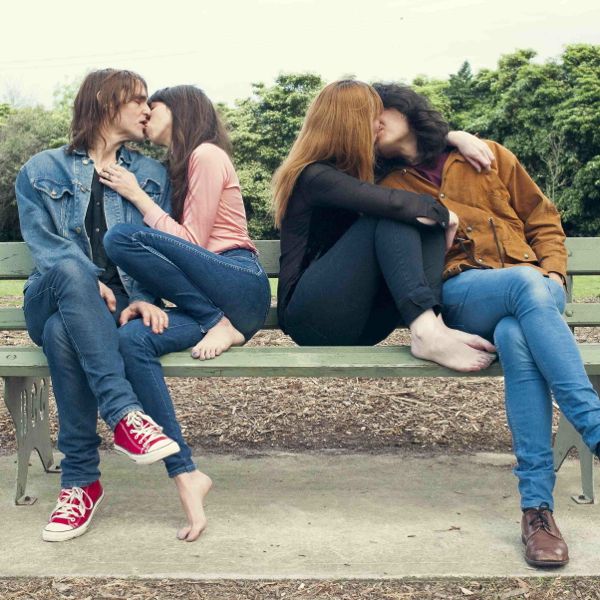 Early Woman is a collaboration between writer and documentary maker Hannah Brooks (St Helens, Spider Vomit, Young Professionals) and artist/cartoonist Ben Montero (Treetops, the Brutals, Montero). The group started popping up on bills around Melbourne about a year ago, performing nicotine-stained love songs in the style established on first demo, ‘Brothers’.

Early Woman’s sound is the perfect meeting point between the decadent, knowing schmaltz of Montero and St Helens’ gritty heroin chic, with Brooks’ serrated vocal and guitar tone complementing Ben Montero’s breathy croon and organ figures. They somehow manage to seem both earnest and sleazy at once, regularly rolling out lines like ‘I love my brothers like a real lover should’.

The band’s first official release, ‘I’m a Peach’ b/w ‘Feathers’, came out on vinyl and digital just over a week ago. As with the earlier ‘Brothers’, the tracks’ pop structure is straight to the point – there’s a bridge for every chorus, and both pack a punch. The best moment here has to be the billowing first hook of ‘Feathers’, Montero’s lyrics an exercise in surrealist romance: ‘Feathers flying all around / when she opens up her gown / I can hardly feel the world around me’.

When you see Early Woman play live – a terrific, tinsel and tie-dye affair – Bobby Brave’s ornate bass playing really comes to the fore, providing much of the songs’ melodic backbone. That element is oddly low in the mix on these recordings, but it can still be enjoyed with a pair of headphones.

‘I’m a Peach’ b/w ‘Feathers’ is out through Mistletone and Inertia. You can purchase it on iTunes or order the vinyl here. The band is at work on a debut album right now and will play a Mess + Noise Lunchbox show on 22 November as part of Melbourne Music Week.