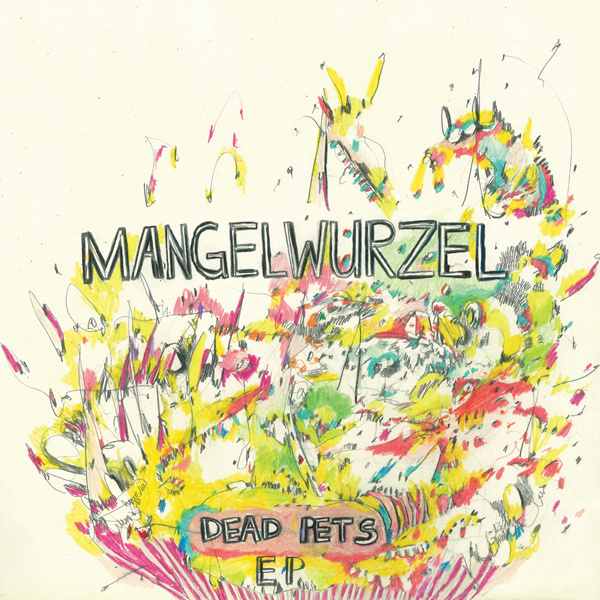 I was a couple of glasses of wine down on a packed Friday at the Evelyn, when Mangelwurzel, hit the stage dressed in costume. There were flowers, disco-balls, smiley-faced bras – everything a tipsy twenty-something could want. Mangelwurzel even brought an actual mangelwurzel*, celebrating in style for the release of their debut EP, Dead Pets.

The EP clocks in at just under ten minutes and wastes no time getting things done. Each track seems to subvert itself half-way through, careening off in different directions before finding its way back to the opening phrases. There’s a sporadic, almost bi-polar feel to the songs and the EP as a whole, where the seven-piece will swing from surf rock to hip hop, from smooth jazzy pop to heavy cymbals and distortion. Yet, there’s a complete coherence in the tracks as well. It’s like when someone walks into a messy room, cries “HOW CAN YOU FIND ANYTHING IN THIS DUMP?”, and you reply  “Shit, mum. I’ve got this”.

While each of the tracks are great in their own little right, the actual recording of the songs is a little underdone. It’s short of bedroom-style production, or rather (and in the nicest possible sense) there isn’t any production. During their set, the band revealed they recorded on an eight-track straight into Vegas. It’s a shame really, as there are points in the EP where the dense layering or dynamic shifts in the tracks could really have been strengthened by some extra production pointers. However, Dead Pets is indicative of Mangelwurzel’s potential and ability – a band that will still manage to sound great on a live recording when most others wouldn’t stand a chance.

If you have an opportunity to see Mangelwurzel live, drop everything, bring some friends, and do just that.

*Did you know these things even existed?!