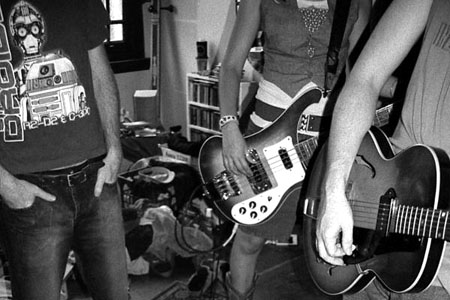 That promo photo should tell you everything – Quarter Acre are an odd three-piece. Try to find info on them and it can prove an arduous task. Here’s what I know: the band formed back in 2000 and realised their first EP Live From The Traffic Islands in 2003, which you can actually download from the Wash Records website. They then released their debut full-length album this year which is called Bored So I… Kicked The Shit Out Of Him (though the cute cover with coloured pencils has it listed only as Bored So I…) Singer/drummer Andrew Burgess is/was a member of a band called The Drugs who, to be completely honest, I know pretty much nothing about.

Bored So I… is an album that I loved the first time I heard it, and basically haven’t listened to it since. Which is odd. I think I loved it so much the first time that I’m scared I’m not going to love it as much the second time. It’s a short record that clocks in at just over 36 minutes, but has such a fantastic musical diversity. It’s constantly shifting, always keeping you interested. It ranges from Pixies-esque rock numbers to alt-country and cute pop numbers. It’s a rough record, with Andrew’s vocals being slightly lower in the mix compared with many other albums – plus he doesn’t have a great voice, but it has a vulnerability to it that makes it endearing. His lyrics are of the same nature – his tales of suburbia are innocent and honest. I’ve never seen these guys live, and they seem to run under the radar of most music media outlets in Australia, which is a surprise because I would of thought that there’d be a lot of fans of Bored So I…