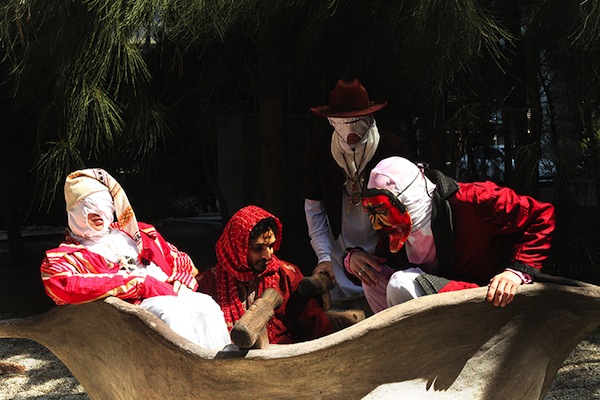 Melbourne-based outfit Curse Ov Dialect are without a doubt one of the most interesting hip hop acts to emerge from Australia. Their penchant for surreal costumes and onstage theatrics, and their outspoken criticism of Australia’s underlying racism puts them at odds with the endless stream of generic drivel currently being churned out. Instead of weakly mimicking US hip hop, a music intrinsically linked to the culture in which it was born, they instead incorporate their own cultural perspective and experiences into a hip-hop framework.

Over the course of their output the group’s crafted a unique sound. Trawling for samples through psychedelic rock, traditional folk and various electronic oddities, they hold these seemingly disparate elements together with a hip hop backbone courtesy of beat maestro Paso Bionic. The distinctive style of each MC and the interplay between them is another defining element of the Curse, with the rapid-fire delivery of Volk Makedonski, the endearing multiple-personality disorder of Raceless and the ethereal flow of Atarangi all adding to the tapestry.

This formula has struck a chord with local and international audiences alike, with the group’s first two full-length LPs released via Mush Records. At the time, the label was leading the experimental hip-hop charge, repping artists like cLOUDDEAD, Busdriver and Aesop Rock.

Seven years on from last album Crisis Tales, Twisted Strangers finds the group in fine form, picking up where they left off – poignant, politically charged lyrics underpinned by their signature multicultural grooves. Guest spots on the album include Japanese furioso Kaigen and Hemlock Ernst, aka Samuel T. Herring of Future Islands. Herring’s been clocking up notable appearances with a number of indie rap’s finest, including Busdriver and Cavanaugh, and it’s great to count Curse Ov Dialect alongside such luminaries.

Watch the video for the title track below and grab the full album on CD or vinyl via Monotype Records or digitally via Valve Records.

Curse ov Dialect will be launching Twisted Strangers at Ding Dong Lounge in Melbourne on Friday, 13 May. Full details here.