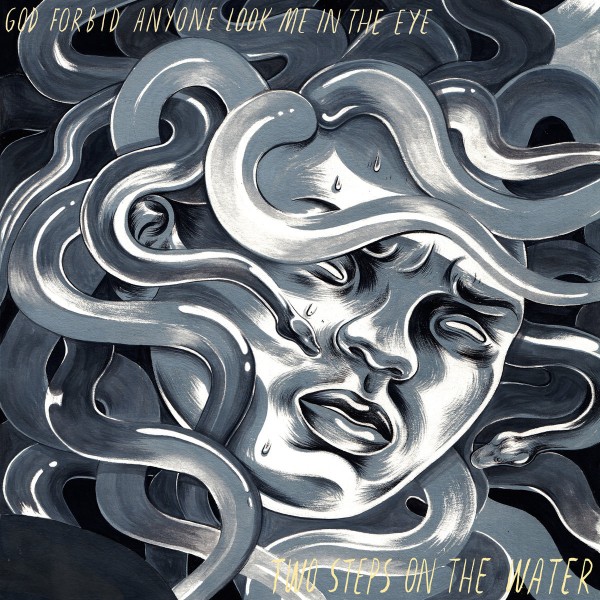 God Forbid Anyone Look Me in the Eye, the debut album from Melbourne trio Two Steps on the Water, dropped just over a week ago. Smack bang in the middle of 2016, the year of woke Facebook bubbles and a music industry that’s rolling over from it’s rock dog decades and letting diversity seep in, if it’s loud and persistent enough. Enter: June Jones. A formidable songwriter, guitarist and singer willing to unpack transness, trauma and a raft of other internal gordian knots backed by the country/folk/punk (or emotion punk) coupling of Sienna Thornton on violin and Jonathan Nash on everything else. Both help with the vocals throughout, tempering Jones’ throttling falsetto or providing the hooks upon which she drapes delicate, devastating melodies.

Initial reviews of their debut have ranged from gentle “it’s not everyone’s cuppa” to outright “not getting it”. It’s definitely a record that requires a response, not at all something to casually play in the background. The track from which the title phrase is pulled ‘My Medusa’ turns from lulling violins turn to flamenco-y guitar to a crescendo of Jones, Thornton and Nash demanding “Don’t look me in the eyes/ I need to breathe.” It’s the early introduction to transness, anxiety and other heady themes Jones’ spits out with gripping eloquence.

It’s followed by ‘Baby and the Bicycle’: “Just leaving the house is political / baby wants a form that’s neutral.” There’s no relief from Jones’ heavy one way conversation at any point on this record, but she translates her pain and heeartache in a way that’s captivating and even funny. The density of each track makes me think we’re barely glimpsing the surface of what Jones is capable of; this bare catharsis that we have the privilege of witnessing is just a selection.

On top of the lyrical bedrock of God Forbid… is the ferocious nylon-stringed guitar that receives her anger, fear and frustration and shoots out propulsive rhythms at lightning speed. Thornton’s violin parts oversee the whole operation, piggybacking Jones’ voice with harmonies and counter-melodies. Nash covers the drums, bass and the organ that quietly backs the “relationships can get royally fucked” track ‘Ships in the Night’. The almost equal attention given to violin, guitar and voice across the album brings the lyrics into sharp focus, and the 9 minute closer ‘Words in my Mouth’ ties them all heart-wrenchingly together in an ear-splitting falsetto, a physical reaction to the pain of years past and ongoing.

Two Steps don’t write songs for the attention of straight cis (me af) music writers or ~lovers~, and Jones’ unapologetically honest account of being queer, trans, in love, healing and every space in between is exactly the kind of sentiment you should be able to wear on your sleeve as a songwriter. You could say Jones’ is mining her past experiences on God Forbid… if it weren’t so clear that she is still working through all of this every day. Just listen to every song, pay attention and take what Jones is saying to heart. It deserves your attention.

I’ve heard excellent things about the Two Steps live show, and you can catch them at the end of this month in these places: