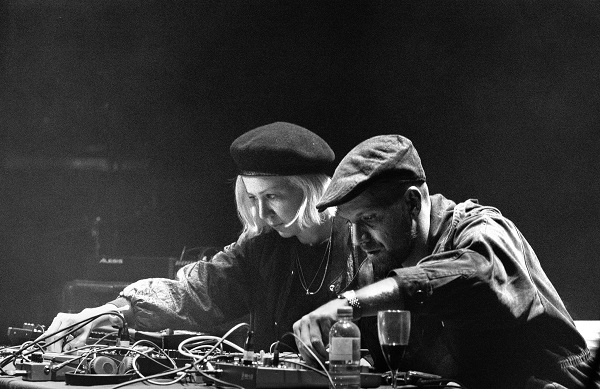 Half High is the work of Sydney Artists Lucy Phelan and Matthew P. Hopkins. Their latest three song, 30 minute EP has arrived right on the heels of their previous release Deserted Squares Under The Rain. However, it’s an entirely different beast from the pure crystalline sounds of that recording with it’s long emotive silences, where buzzing mechanical noise was used as rhythmic devices, to deliver small shocks to stop the music fading into the background.

Deserted Squares… is a beautiful mixture of ‘natural’ sounds – electronic ripples and whispers, with industrial undercurrents breaching the surface every now and then. It’s the kind of ambient music that draws vibe and mood from silence and stillness. Rubble Indent  is wholly intrusive. It invades the space around you creating a character that is unnerving, unpredictable and harsh.

Gone are the chimes and ripples, there’s no pretence of naturalism here – this is a kind of practical music, the sound of motions and actions repeating, energy being built up then deconstructed in surprising and uncomfortable ways.

Phelan and Hopkins are also visual artists, whose live shows are as much about picture as sound. You will lose something when listening to this music without visuals, but it’s also startling how readily your brain will create its own given the droning stimulus.

Phelan also plays hard-hitting and inventive dance music under the name Lucy Cliché, though I’d find it hard to draw too many comparisons between the two – maybe those heavy crashing beats, cement against metal, brain against skull, cycling faster and harder towards the end of ‘Glorious Glug’. But that’s probably a stretch.

Rubble Indent‘s second track, ‘Ground Grey’ is comparatively pretty to begin with – the ambient sounds of a space prison yard, of an empty robotic future. My favourite part comes towards the middle of ‘Send Caresses’ – a seething ocean of sharply sparkling noise punctured by dark whale-like sounds.

Honestly, I don’t listen to much stuff like this cuz I’ll have a weird time for the rest of the day – I’m too easily effected by mood in music. But this EP is just so impressively constructed, such a beautiful piece of sound art that I keep coming back for more unsettling noise, more strange and sinister droning to freak out the work day.