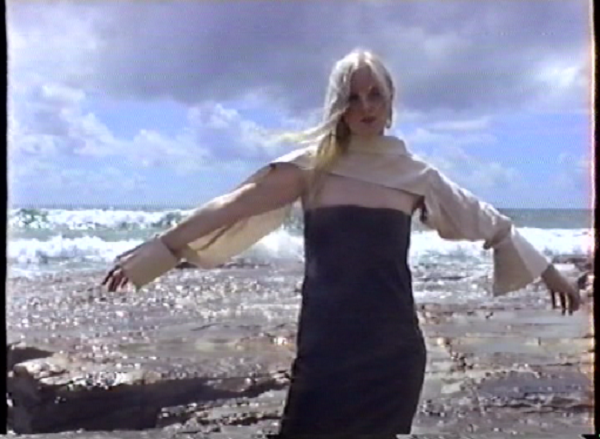 I think one of the things that sets Rebel Yell apart from a lot of other one-person electronic bands is Grace Stevenson’s impeccable taste. It’s all over this video, for ‘High Authority’, her first single since last year’s ‘Mother of Millions’ EP. She’s working with director Triana Hernandez, a Melbourne writer and director who’s burst onto the scene with some powerful and beautiful videos (she also made Various Asses’ recent clip for ‘Down Down’ – which so. Fucking. Gooood.). It’s especially in the clothing, from brand new Brisbane fashion designer Ellen Chandler, which Stevenson cites as the clip’s main inspiration.

‘When I first saw the outfits that Ellen had done for her graduate collection I started getting ideas – the video is based highly around the clothes, a fashion film style I guess. Her outfits are amazing and super confusing to get on! They’re all made up of other garments and at one stage I had pant legs coming off my arm! Originally I wanted the film in the desert, with a lizard, but time, money and an actual place to film it made that difficult.’

Instead of heading to the outback and auditioning reptiles, Stevenson settled on one of the scrubby beaches and brown rivers that make up most of South East Queensland’s less-than-postcard-perfect coastline. It’s an area she knows well, growing up around the Sunshine Coast – she scouted locations while visiting her folks.

The video itself revels in a kind of dirty glamour – it’s DIY but never looks cheap or half-arsed. They used a VHS camera and in some scenes, the car headlights as lighting. There’s a grainy road B-movie kind of feel – which lead to a decidedly un-Hollywood moment during the shoot. ‘We had a break at my mum’s house in Eumundi before it got dark, then used my car lights for the lighting out off a dirt road. I, being highly intelligent, turned off the car but left the lights on. So we waited about an hour or so for YOUi Assist [ML:is this a plug? Can we have some money?] to revive my battery. My mum did bring us some dinner in takeaway containers though, so that was nice.’

The song kind of speaks for itself – it’s bombastic, direct and, yup, heaps authoritative. The B-grade movie vibe continues in the sound, but now it’s a space horror – lazers and squelching effects. Like, cat-suited lady aliens biting the heads off human men or something.

Stevenson has a background in dance, and the sharp shapes she makes in the video shout power and control, thanks to the help of local dancer and choreographer Erika Goldsmith. ‘Erika choreographed the dance sequence at the end of the clip’ Stevenson says, ‘I remember she taught me a dance at school when we were both kids, and I’ve been doing her Rhianna dance classes this year, so we’ve known each other for a long time. Erika advised me on things that would look cool to do in the setting with the outfits, but some of it I had to ‘freestyle’ – that was when my car died.’