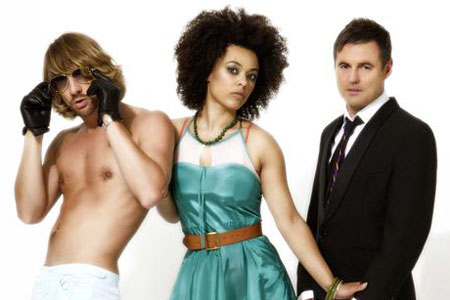 Sneaky Sound System – ‘I Love It’

As Bob Dylan famously announced, “The times they are a-changin”, especially for the Sneaky posse, who seem to have transformed from everyone’s favourite club act into commercial superstars overnight. Of course, Angus and Daimon (i.e, the boys) have been banging out tunes for over five years, acquiring a legion of devoted fans in the process from their ‘Sneaky Sundays’ jaunt at Hugo’s Bar, home to the urban elite in Sydney’s party central, Kings Cross. Yet it is only recently that their hard work has come to fruition, in the shape of their banging self-titled album.

Part of Sneaky’s newfound influence can be attributed to their newest member, the stunning Connie Mitchell, whom the boys stumbled across in Hyde Park playing guitar and singing. Like Fergie to the Black Eyed Peas, Connie has only served to enhance the already distinct Sneaky sound. The Sneaky D.I.Y approach has certainly taken them far beyond the realm of their wildest dreams, as they were recently nominated for two ARIAs (NB: One ARIA in Australia = One Grammy in USA, One Brit Award in the UK, etc), and invited to support Robbie Williams on his upcoming Australian tour. Quite ironic, considering their statement “We’re like an electronic garage band with delusions of stadium glory.”

These guys make seriously good music. They make sugar-pop groups with electro trimmings like the Rogue Traders and Bodyrockers look like preschoolers. Rock on.