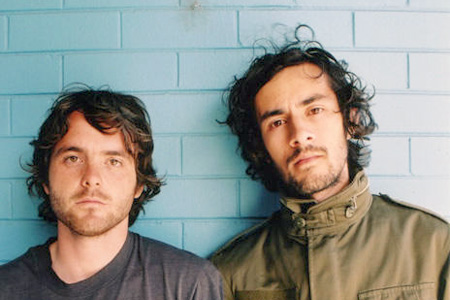 “Dude, this crowd is so scene…”

A phrase often overheard at Midnight Juggernauts‘ gigs, where old highschool buddies Andy and Vincent proceed to blow indie kids’ minds, especially in their hometown of Melbourne. Though they have only just released their EP Secrets Of The Universe, the boys have supported with some rock’s premier acts. Wolfmother, DFA 1979 and songstress/DJ Annie are all quick to praise the duo, currently labelled as the “hardest working touring act” in Australia. And the gigs just keep on coming, as the Juggernauts hit the road with Canadian wunderkind MSTRKRFT.

Their sound is truly inventive, mashing up pretty much every electro subgenre of the past few decades, leaning heavily towards the moody synth-club sound which echoes New Order and to a lesser extent, Daft Punk. First single ‘Shadows’ showcases this sort of zombie-flick-vs-neon-disco concept which has catapaulted the Juggernauts to stardom. They’ve got an album in the pipeline, a headlining tour in the next month, followed by a slot at the prestigious Homebake Festival in December, the lauded, annual all-Aussie festival which takes place in the heart of Sydney. These guys don’t even need the promo; friends like Cut Copy, The Presets and Chromeo speak for themselves.