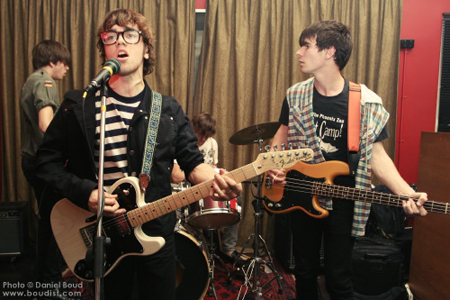 I’d like to introduce Sydney four piece The Ghosts. A mixture of boyish stage benevolence and ear friendly melodies, this group has been together not even a year and yet their potential is yet to be contested by anyone who has been to one of their live support shows, which have only been sighted in few Australian cities. They have attracted the attention of industry moguls and regular live music observers alike, working recently with producer Nick Littlemoore (PNAU & Teenager) and playing live at the Modular/Ksubi Christmas party as well as standout support sets for Australia’s salient Mercy Arms and 80’s revival act Van She.

If the demos on their MySpace are mere premonitions of what’s to come from the beaty beaus song wise, then dare I say it, they just might be Australia’s next big thing. I’ve indulgently been at many of the band’s shows (and intend to keep appearing), at times standing pensively within a sea of frenzied dancers. What I revel at most is how their sound has always seemed fitting as a support, despite having shared bills with very different acts, from the likes of The Infadels to the Klaxons and Mercy Arms, and how they seem to always strike a chord with each nights’ audience. This said it’s the songs, whose genesis can be credited to Gabby the band’s eye wandering vocalist, and the performance of equally able band apparitions that make this fraid of musicians worth a watch. Have you seen a Ghost lately?