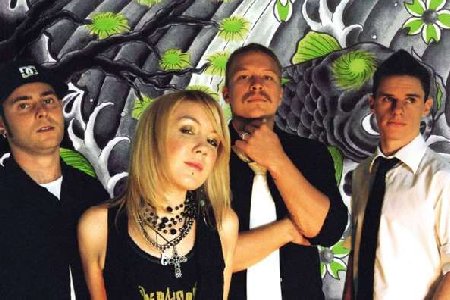 So these four Northern Beaches kids like to call themselves The Third Cycle.  If you’ve gone to at least a handful of gigs in the past few years where the bands on stage turn their amps up to eleven, then you’ve probably seen the members around, either in this band, or in their previous bands.  Vocalist Jess Donnellan used to play in an all-girl group called Charlie.  Bassist Clint Ossington and drummer Scott Chandler used to play in a band called Unsaid (Clint used to sing and Scotty used to play percussion).  And Matt Dobson… well, I just can’t remember what band he used to play in!

They hit the stage in 2006 surrounded by a lot of publicity – smart move really on their behalf: build the hype and watch the people come, which they did at their first official show at the Annandale Hotel (they played a warm-up show under the name “The Turning Day” – yep like the song – at The Lair, Metro Theatre in Sydney).

They’ve played a bunch of shows, and are starting to build a pretty solid fanbase.  They’ve got a 3-track demo floating around, and you can hear all the songs off it on their MySpace page.  I think they’re currently recording an EP with producer Dave Petrovic, so keep your ears out for it.

Oh, and P.S. I don’t know what “The Third Cycle” actually is.