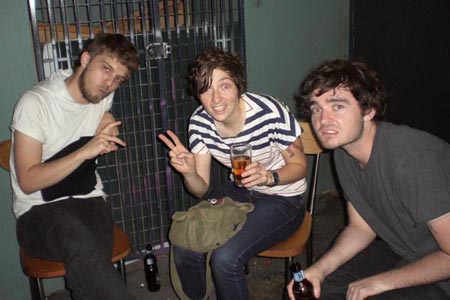 Don’t be fooled by the title: the brand new single from Brisbanites I Heart Hiroshima is the antithesis of punk. Jangly clean guitars ring beneath girl vs boy vocals that are delivered with a life-or-death urgency. Kind of like the way Win Butler from the Arcade Fire sounds like he’s singing every song from a podium, orating people who aren’t listening, trying to get the message out before it’s too late. Too late for what, you ask? Fucked if I know…

It’s kinda twee, in an Architecture in Helsinki kind of way, which everyone seems to love at the moment. Not that it’s bad, it’s just in vogue, and that’s cool. ‘Punks’ seems to belong in that casket, and there’s something about its simplistic nature that’s rather endearing. It’s the first taste of their new album Tuff Tuff which will be out soon. It’s not going to set the house on fire, but you won’t want to burn it down out of anger either.