Since 1987 South by South West (SXSW) has been held as an annual Music and Media conference and Festival in Austin, Texas. Every year show casing hundreds of musical acts from all over the world, this year there are a number of Australian artists and bands taking the stage to represent this nook of the world from the 14-18th March. I scraped together a list of the bands that are playing at one of the many venues across downtown Austin. Though I’m certain I might have missed a few, I’m predicting these performers would love to receive messages of support from friends and fans back home.

From Perth we have Andrew Winton Duo and The Panda Band, and from Brisbane The Zebras. From Sydney-town there is rocker’s Expatriate, Electro kids The Presets, SPOD, Josh Pyke, Macromantics, Brave Rader, and for all those O.C loving Americans, Youth Group. Plus representing the old school is Hoodoo Gurus and You Am I.

Then from Melbourne comes Children Collide, experimentalists Sunwrae, Ian Wedley, Architecture in Helsinki (who I have it on good account are also shooting a new film clip in Mexico at the moment) Airbourne, Dallas Crane, The Beasts of Bourbon, Borne, noisy pop artists Via Tania and The Gear.

Finally my favourites Wolf and Cub from Adelaide, who will be back in town with Wolfmother next month- yay! And finally a mention to the Kiwi kids, Die!Die!Die!  plus The Mint Chicks and heavy rockers Blindspott. Phew… It would be extremely cool to be there, though any stories which detail encounters with The Who’s Pete Townshend, one of the speakers at SXSW (about God knows what) would perhaps suffice, at least for this year. 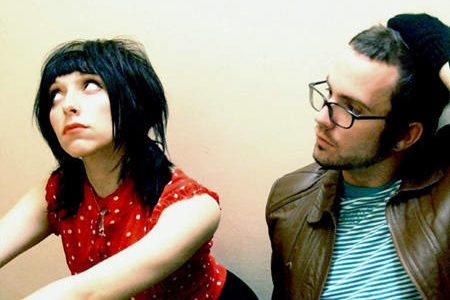 My earliest memory of live music is, for the large part, of Sydney’s experimental underground scene. Basically, my friends and I were underage and not having the means of going to licensed venues, we discovered this band of parties and performances that would be held in abandoned spaces. Some might remember a collective called Systems Corrupt who housed (often illegal) parties at venues like 61 Regent Street and the now demolished Graffiti Hall of Fame (drop me a line if your curious to hear more). The music that came out of these parties was largely experimental dance, early electronic and often noisy – this was the days before BANG GANG! Though just recently, at the opening night of a new Sydney Indie night I heard Sydney two-piece Emergency Emergency and all this nostalgic liking to experimental music returned.

Katerina and Stephen used a number of instruments in the making of their music, and have a great balance between melody and noise which made the set challenging but enjoyable. I’m becoming increasingly fond of bands which sit outside the indie/electro mould, and these two have seemed to find something largely untouched. With just enough ‘song’ ingredients to here is the very cool GameBoyz to have a listen too. I would love to know what you think. 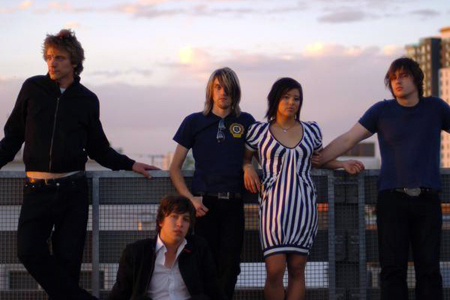 You couldn’t ask for a more appropriate or fitting title to the debut single of Melbourne five piece Young Lovers than ‘Talking in French’ which is due for radio release in the coming months, with a debut E.P to follow shortly after. Though French maybe the language of lovers, this single will surly speak to the suitors of pop driven indie; romantic vocals, yet enough rhythm to shake up the dance floor. Though I found it quite similar, and might I dare add, not as immediately catchy as Starky, before you shrug of these romantics as yet another indie band, have a listen to the demo version of ‘Talking in French’ or catch them in live music haunts in and around Melbourne and let me know what you think.

Cast your live music memories back to last year and you might remember the band that was hand picked by American dreams The Strokes to support them on a sold out Australia tour. A band I’m already very fond of, Sydney’s Mercy Arms [not The Mercy Arms] will be releasing! After a road trip south to Adelaide to record with producers from Sound Works Studios, Thom, Kiren, Julian and Ashley are back in town with a yet to be titled E.P for release just in time for their festival debut at V-Festival, with dates in Sydney and Brisbane. I have been lucky enough to hear a preview of this release and can report it is a five track musical journey along a path of dance floor favourites, large stadium chorus, catchy guitar leads with a delicately ambient ending.

I am particularly bias towards the quality song writing, but thank god there is finally a small taste of Mercy Arms you can take home, and from what I gather, it’s just going to leave you anxious for more. It’s without a doubt going to be a big year for this quartet, so here is the demo version of ‘Kept Low’, the first single from Sydney’s own Major label lads. 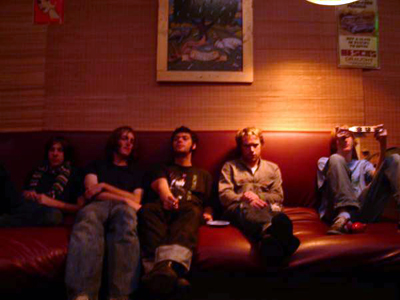 So you don’t have a significant other to spend Valentines Day with this year? Sydney band Warhorse is staging a St. Valentines Day Massacre to honor the unlucky in love or those in love and want to kill each other anyway. I’m not quite sure what to expect from the night but Warhorse, having been together for about a year and play a type of sub-psyche rock, should be well worth the heart break. They’ve recently come out of the studio where they have been working with Burke Reid (Gerling) recording their E.P, and have played a number of shows around Sydney. Presently going through a change of line up with the drummer, last time I saw Warhorse was at the Snowman album launch show in Sydney and it was a pretty dirty show. If you’re in Sydney, you can catch them this Friday the 16th at Boobytrap at Melt Bar, this time supporting The Instant for the launch of their album Notes & Errata. Jasper is a rather obnoxiously entertaining front man but if you want something other than flowers and chocolate, Warhorse just might be the perfect date. 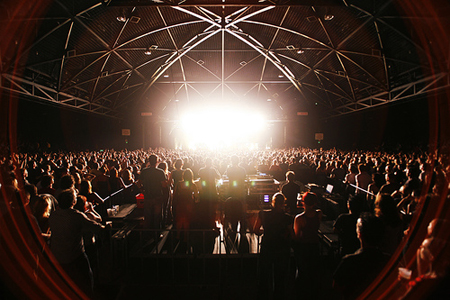 It’s now only three hundred and fifty something days until the next Big Day Out, and if you had the kind of day I did you are going to need every one of those days to recover! Big Day Out 2007 has come and gone along with the entourage of international artists who flew south for the occasion. For the curious, the off shore acts that wowed were synth tinkers Hot Chip and English egos Kasabian.

I arrived with two friends after some very early drinks (in true Big Day Out spirit, though it just happened to be the day of my birth too) though almost instantly I found myself solo. My friends had scampered off ahead to see central coasters Something With Numbers reporting back later that they were surprised at the size of the crowd that were at the stage, (this being a worthy call considering they’ve been long term fans from the beginning). The band was ecstatic to be at this gig, and security could control the fans invading the stage in excitement.

Meanwhile, I made my way to Scribe at the main stage. It was an interesting decision having this huge kiwi rap lord play on the main stage considering he hasn’t released anything since 2005 (his second full length album is due out this year). Scribe made a guest appearance at the Lupe Fiasco side show two nights before and killed it. Though he played too early in the day and isn’t quite a stadium act, he threw everything at the audience, and remains my favourite hip hop artist this side of the world.

Scrabbling still solo through the masses I made it to The Vines who absolutely nailed it, having all beers raised, kids going ballistic and ended the set with a token smash up. The songs have melodies and Craig Nicholls had just enough sanity to maintain them, and so little that keeps a Vines show one of the greatest Aussie grunge acts to date. Perth outfit Snowman were on the same stage later on, and these guys are growing into their live shows very quickly, though the impact of their defining quirkiness was lost in festival fever.

Bob Evans played at dusk and provided the perfect escape from large crowds, evasive rock music and general festival seediness. Most might not even have been familiar with all his tunes but his easy listening acoustic set was just right for those wanting to chill. Finally for the Australian headliners, I didn’t make it to Jet, though I’ve heard from a number of lips that it was perhaps the biggest anticlimax of the day, expressed passionately by so many, I would love to know what went wrong?

Finally, The Presets, who’ve come a long way since their twelve noon Boiler room set just a year ago. Julian and Kim had an all adoring and largely rowdy crowd, articulating their love for the Sydney audience; it really did feel that this massive local gig was perhaps the best show of their career. I jumped when Kim did and left Big Day Out just after, with sore legs and ringing ears; I’m thinking it might just be my last. 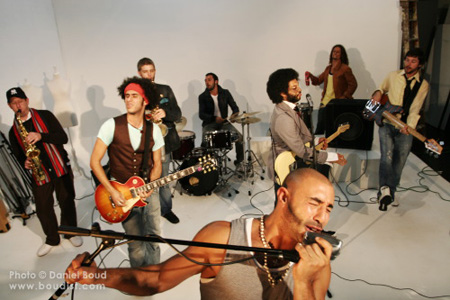 Sydney-based nine piece soul hip-hop band Kid Confucius is back, after winning Best Urban Act at the 2006 Dance Music Awards, they are armed with a new album to be released in the coming months and one very hot “ghetto love song” single! Thanks to a notorious Sydney photographer friend of mine I was lucky enough to help out at the photo shoot for their new promotional pics and look in on the filming of part of their new video for ‘Moment’, that boast one of the funkiest guitar leads I’ve heard for a very long time.

I was completely intrigued at the dynamics of the group, dashingly dressed and equipped with equally cool moves, they sit somewhere between Welcome Back Kotter and The Wanders. At times they were a playful gang of mates with hearts and smiles filled with prankster affection that could almost instantly shift into a hard working tough guy exterior, plus each are extraordinarily proficient at their instruments. With an album launch planned for Sydney in March I’m looking forward to seeing how this chemistry translates live. My prediction is that Kid Confucius could well bring down a full house, with their seriously sexy moves and funk filled rhythms. Though, it is mere speculation, check them out for yourself, and let me know what you think.