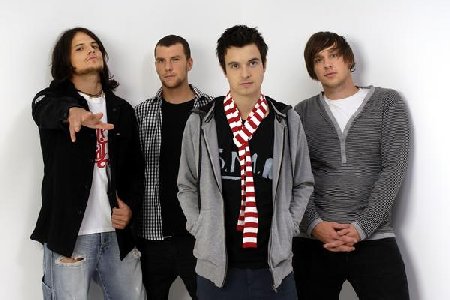 First off, I have to say… that is a terrible promo photo.

Now I’ve got that off my chest, let’s talk about Melbourne boys Kisschasy.  I’ve never been a big fan of their music, but it certainly doesn’t offend me.  But when I was a budding little music jounro, getting paid nothing to write (thanks to the music mag which shall not be named), I got a chance to interview Darren and Joel from the band who really couldn’t be any nicer.

Kisschasy write very solid pop rock tunes – the kind that you just can’t get out of your head for days and days.  They’ve just released a brand new album called Hymns for the Nonbeliever (cool title) and their first cut from the record, ‘Opinions Won’t Keep You Warm At Night’ is a pretty good summation of the sound of the album.  If you like this song, you’ll like the album.  If you don’t, then you won’t.