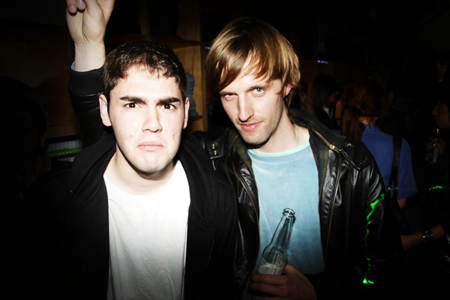 Last Friday I went to an industry shindig at the new Lee Jeans store/art gallery on Chapel St in South Yarra. I was told the free booze might dry up early so when I turned up true enough seasoned early birds scenesters were already downing Jamiesons and dry. Funny thing is about 7 or 8 of them were wearing flanel jackets/shirts, a true sign that grunge fashion is making real headway into a comeback. Grunge music however isn’t that successful at coming back because the soundtrack for the party was provided by Ajax and Jamie Doom of the ravy Bang Gang crew, one time whothehell.net poster Levins (DJ Sleater Brockman) and trance revivalist Muscles. ‘Sweaty’ was the first song that he played. The only copy I have of the song is a cheap sounding myspace rip but if you turn it up you can really tell that this man is on a mission to remind all of us how good it is to be peaking. On top of worldwide buzz and an upcoming debut album, he has been announced as support for the Daft Punk Australian tour in December!

To spice things up the organisers of the party arranged some wildlife attractions in the form of snakes including a big Phyton, creepy crawlers and a baby Alligator to be held and cuddled in the crowd. Would Steve Irwin have approved of this party trick? I would like to throw this prickly question to a new favourite blog Movestill, started up by former whothehell.net blogger Sophie Braham and her FBi posse in Sydney: DJ Anna Lunoe, celebrity confidant Nina, radio star Michaella and superfunster Neha (recently returned from exile). Check it: movestill.blogspot.com