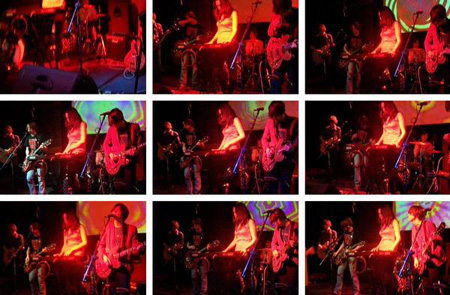 Last week Sydney University held the grand final for their prestigous band comp, a competition which has kick-started the careers of some of Australia’s best known bands like The Whitlams, Frenzal Rhomb and Youth Group. Last year’s winners were cool kids Cloud Control, and this year the honour of champion band has been bestowed upon The Laurels.

Lately there has been a resurgence in psychedlica inspired music (sans the copious amounts of LSD) propogated by Richard In Your Mind, The Morning After Girls, the redsunband and Belles Will Ring. The music of The Laurels definitely harks back to the sounds of Lennon-led Beatles, Velvet Underground when they were bed buddies with Andy Warhol and more recently, Black Rebel Motorcycle Club, the Pixies and Sonic Youth.

Ironically enough, I had their drummer Kate on my radio show the night before (along with a member of each band playing in the band comp final, bar The Jezebels) for a session of music trivia to find out who the brainiest band comp band was. Turns out Kate won. An omen, so it seems.