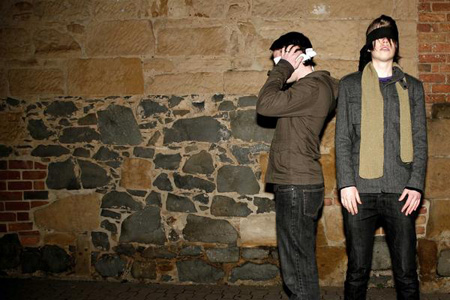 The Scientists Of Modern Music – ‘Easy’

Last week my mate Rohan bought a $700 Korg keyboard. Soon another mate Ross was showing off his skills with the built in vocoding effects, I believe his words were something to the effect of “give us a few weeks and we’ll write better songs than the (Midnight) Juggies!”

I have a feeling similar proclamations could have been made when Tasmanian duo The Scientists of Modern Music started out. Maybe they are victims of bad timing, but their sound is a bit old now considering how ubiquitous Oz electro-clash is. Signed to Rubber Records and recorded by Daniel Jones (of Savage Garden, remember them?) they’re not short on resources to come up with quality record, but the material and style is not exactly fresh.

Too bad because they are pretty good live, and the organisers of Falls Festival must really like them because they are playing both days this year. I saw them played on new years’ eve last year and they sounded pretty good then. Funny thing is the promoter told me “give these guys a year they will be bigger than the Midnight Juggernauts!!” True story.