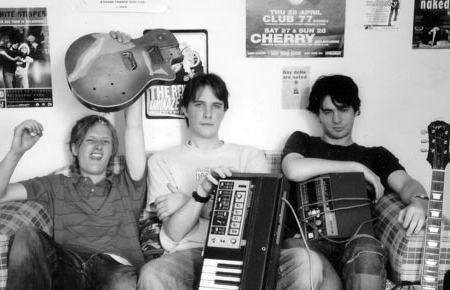 I’ve been told that the electro-clash movement peaked two years ago. What about the electro-punk movement then, did I miss it altogether or did it not happen at all? Because that’s what I think of when I’m trying to describe Group Seizure’s music. It’s electronic music written in punk structures. Or maybe, a punk song written with sequencers and looping stations. Dance-punk? Does it matter?

Aside from the very cool band name, Group Seizure are three hyperactive Melbourne kids who play music with two guitars, a keyboard and a drum machine. They recorded and mixed their 5 track debut EP in one day last year and got some good reviews in the music street press, but nothing much happened. Most people outside Melbourne wouldn’t have heard of these guys, and I’m not sure if this type of music will ever get big, probably not in Australia. I like it though.