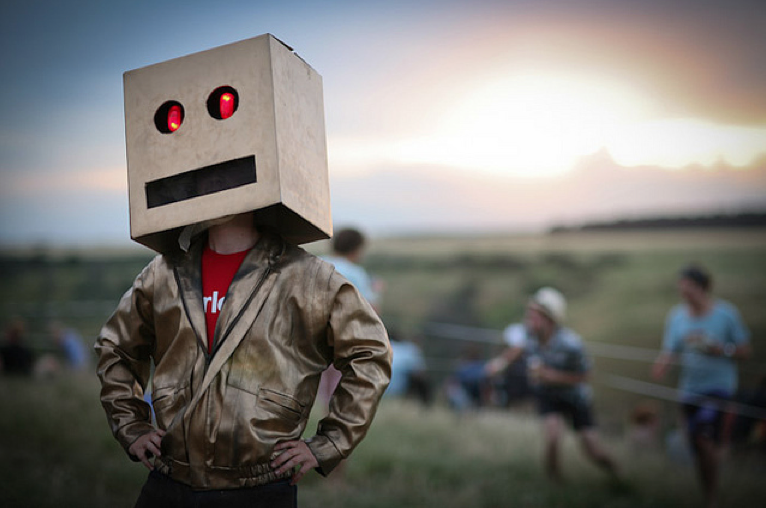 Last weekend marked the 21st anniversary of Meredith Music Festival and the start of another summer festival run. Headliner Total Lunar Eclipse did a no-show due to a cloud cover, but the cosmos aligned in other ways; Barbarion threw some flames, Grinderman bid us adieu and Big Freedia… brought the ass (everywhere). Meredith organisers have been good to the people for over two decades and the weekend delivered. 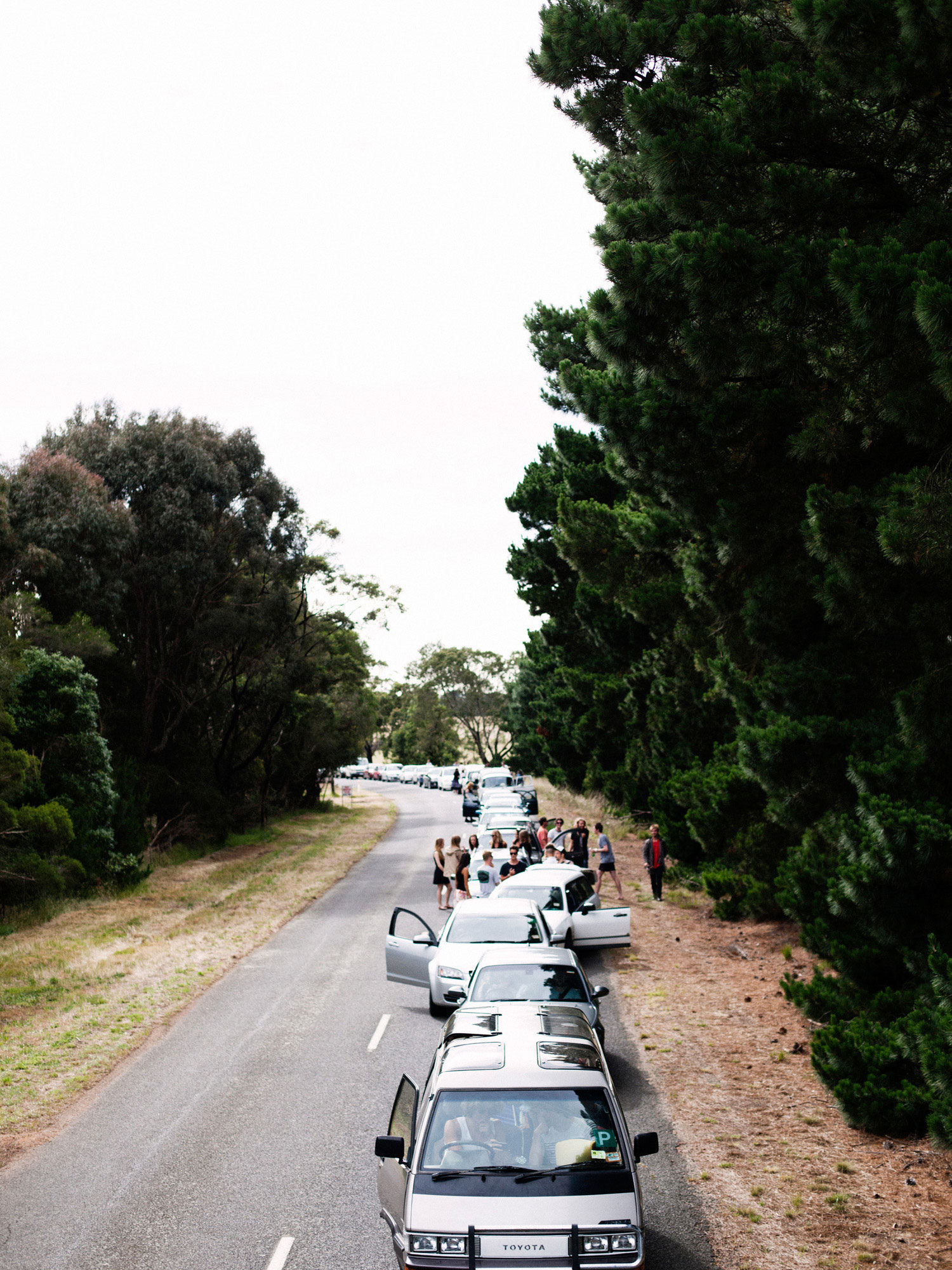 With Mike Larkin’s grim prediction of torrential rain forecasted for the weekend, Aussie Disposals survived a mass pillage on Thursday as punters prepared for a rerun of Meredith Mudbath ’08. Contrary to the shitty forecast, Friday was all sun. Apart from having our windscreen smeared with some 40+ orange butterflies we hit somewhere past Geelong, it was a cruisy traipse down the Princes Hwy until we poked the line. A large mass of punters seem to have bypassed the ‘no dickhead policy’. Fools who overtook the long line of fair queuers, got bad karma and runs from the Hare Krishna tent on the weekend. Eco tyrants who also scampered past the queue on fixie bikes also provided comedic entertainment, after said fixies encountered punctured wheels on gravelly terrain.

Meredith minions parading around with yellow tees were strategically placed around our welcome path as ushers, but all were useless at giving directions. One of my mates wrangled a free ticket for three hours of handing out ‘snakes and redbull’. Order seems unnecessary when you have vibemen.

On the topic of vibemen, the main stage was packed to see King Gizzard and The Wizard Lizard open the proceedings. Perched on the edge of the stage, the rowdy 7 piece wasted no time on introductions. The driving beat of ‘Lunch Meat’, anthemic ‘Willoughby’s Beach’ and the rest of those whooops, theremin and fezzy swamp stuff caused a minor dust storm in the front left of stage. A cover of theFinn Brothers ‘She Got Body, She Got Soul’ was an odd filler, but Stu McKenzie, with the mic halfway down his larynx gargling out Iggy’s ‘I Wanna Be Your Dog’ showed us why these dudes translate so well live.

Gizzard may have lubricated the mic for Cash Savage and The Last Drinks, but it was all a bit of a flop. Cash’s bluesy drawls came from the heart, but crowd banter like ‘YEEEH, WHO’S BEEN DRINKING SINCE 6AM?!” and ‘THIS SONG IS ABOUT A BROKEN HEART. HAS ANYONE HAD A BROKEN HEART?” would have probably been better scripted for cover night at the Espy. 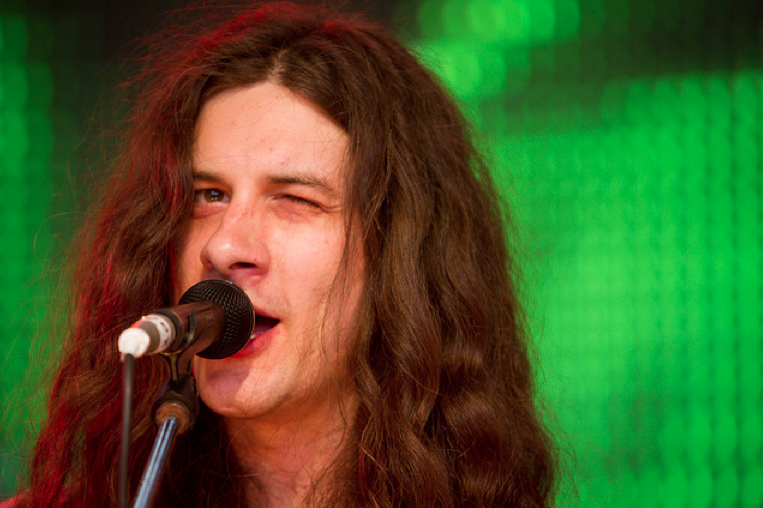 With the sun setting behind the main stage, Kurt Vile’s hazy acoustics and stoner drawl were a perfect way to end day one. People often point out Vile is boredom’s biggest pin up boy, and shoddy vocal mixing on slower numbers like ‘Ghost Town’ and ‘Peeping Tomboy’ unfortunately may have backed up that belief. However, Kurt ‘takes a whiz on the world’ when he’s given a bit of melody – ‘Baby’s Arms’ turned the stoic crowd into soppy fools and that hook from ‘Jesus Fever’ redeemed the sound guy napping off at the controls. 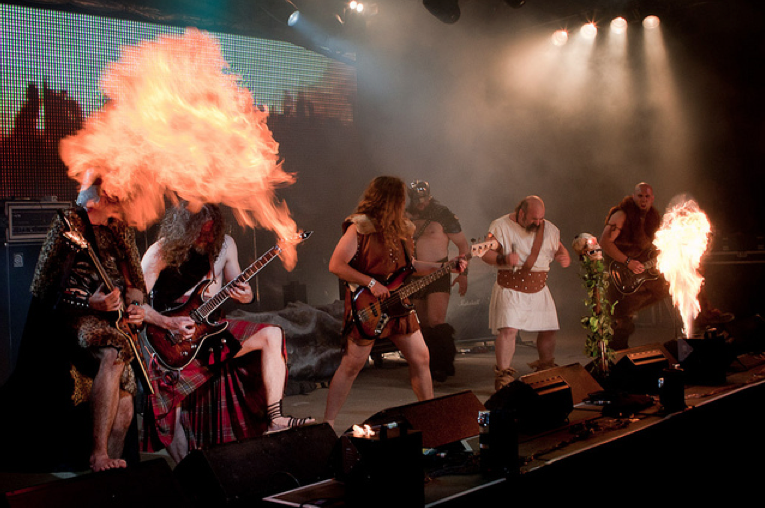 There was a distinct sound of trees being unhinged from the ground as Barbarion stomped into the ampitheatre/Mordor. With an ample supply of pyrotechnic wielding axes, flame propellers and fat rolls threatening to overhaul what looked like several S&M get-ups, the joke slot of the night soon turned into everyone’s highlight. The fat bearded guy roared at the crowd to pump their fists. They pumped their firsts.

The general consensus was bored by Ladyhawke’s new material, but all the same critics sung along to hits like ‘Paris is Burning’, ‘My Delirium’ & ‘Dusk Til Dawn’ with the same fervour and oversized ken done sweaters like it was ‘09.

Future Of The Left made everyone a little aggressive, unfortunate for Juiceboxxx who copped a meat tray of abuse. “YOU DON’T KNOW WHO THE FUCK I AM, BUT I DONT KNOW WHO THE FUCK YOU ARE EITHER!” he yelled to a staggered boo chorus. Kinda get the feeling Juiceboxxx’s stage mum still locks him in a room with bad MTV reruns and only lets him out at intervals for his Ritalin dose. The words ‘I Don’t Wanna Go Into The Darkness’ flashed across the main screen in big caps as he revelled in air kicks over and over. He endeared me by the end, but the rest of my peers having bad come-downs suggested we trade in watching the self indulgent, skinny white american kid bouncing around for some more productive things. I make my fifth visit to the Beatbox Kitchen in three hours, get jumped by a guy dressed up as a priest, have a fan attack after Kurt Vile gets into our ferris wheel carriage and proceed to pass out in my broken tent. 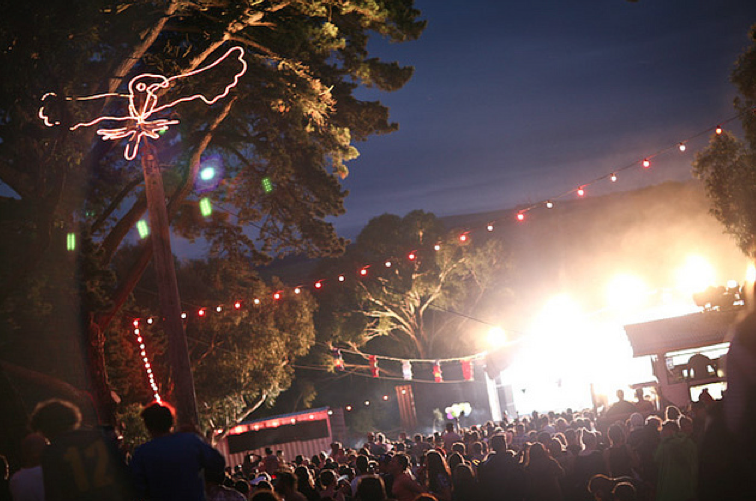 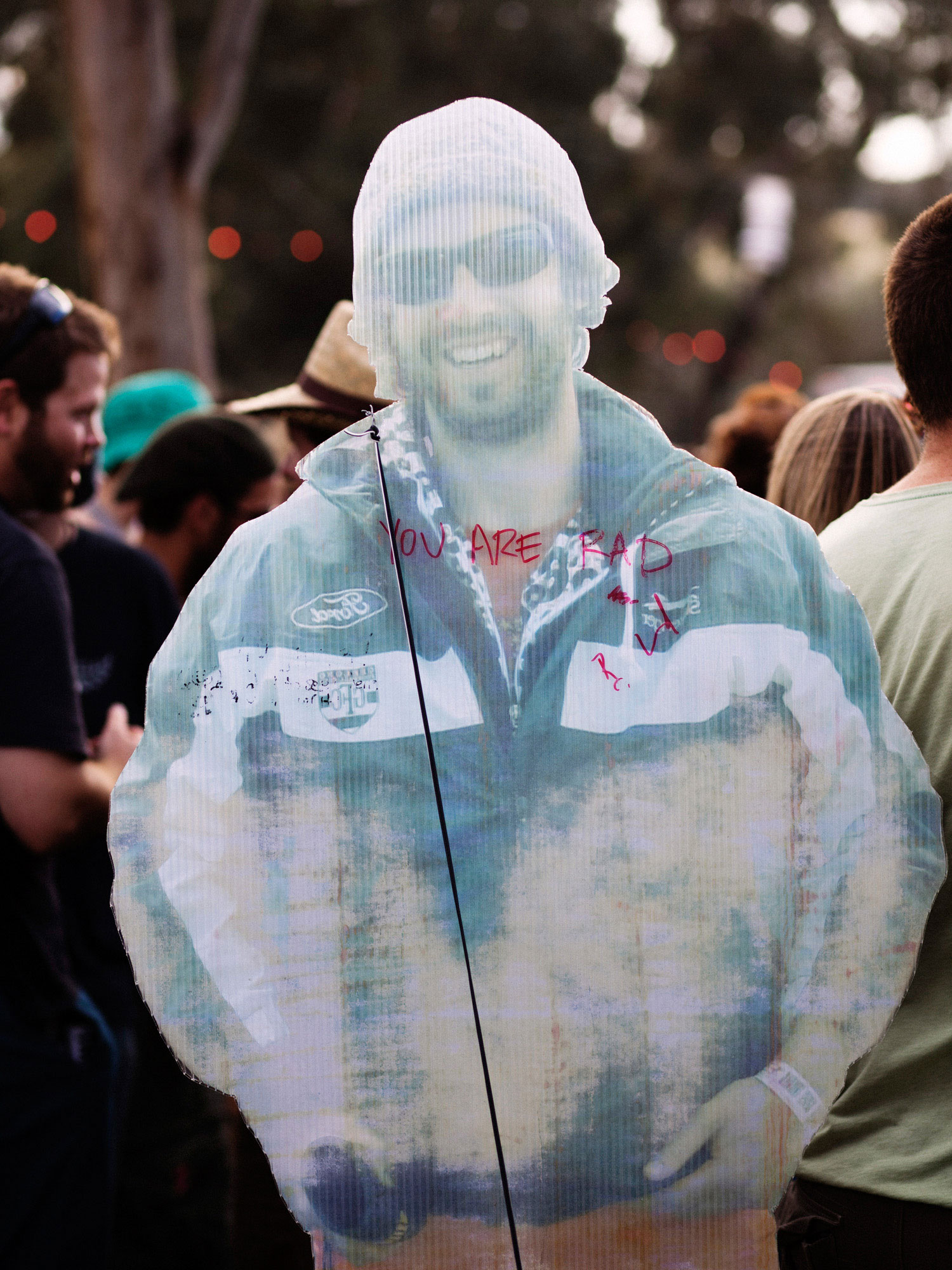 Alternating between three slurpees in hand, I waddled down the hill to catch some of Oscar and Martin’s whiteboy R&B. Their cover of ‘Bootylicious’ may have been almost unrecognisable and little too complex for the early morning crowd, but they did get everyone dancing. I was curious how the cut and paste beats and pigeon cooes would go down with a large festival crowd, but the duo (+ special guests) definitely set the bar for the morning. ‘Do The Right Thing’ and ‘Wa Wu Boys’ put everyone in a good place.

While many attended Meredith to see Nick Cave thrust around in his dinner suit, Adalita definitely made a Meredith moment on Saturday afternoon. No flourishes or anthemic hooks here, just Adalita’s solemn wail and guitar. The late Dean Turner’s two young daughters joined her on stage, each switch of the pedal magnified crowd sentiment. With the slow guitar hone of ‘The Repairer’ echoing out around the ampitheatre, Dean was probably peering on, somewhere quietly from the sidelines. One of his girls ran up behind Adalita to give her a big hug during one of the last songs. It was a bare bones set, but a moving tribute. 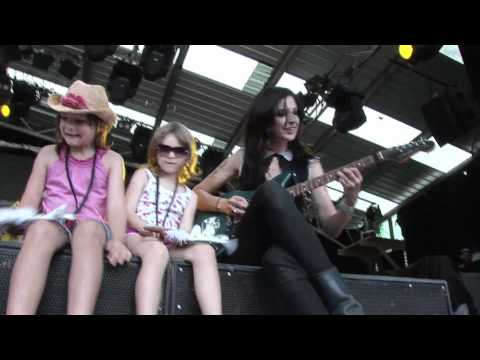 Any good festival slot needs a few bands to dig at your fading nostagia. Mudhoney and Icehouse brought the goods. Iva Davies’ anecdotes are probably more corporate function than stadium rock these days, but ‘Great Southern Land’, ‘Electric Blue’ and ‘Little Girl’ prompted a mass sing along. My folks played more Kenny G than Icehouse when I was a kid, but daggy 80’s saxophone wig outs unite us all the same. 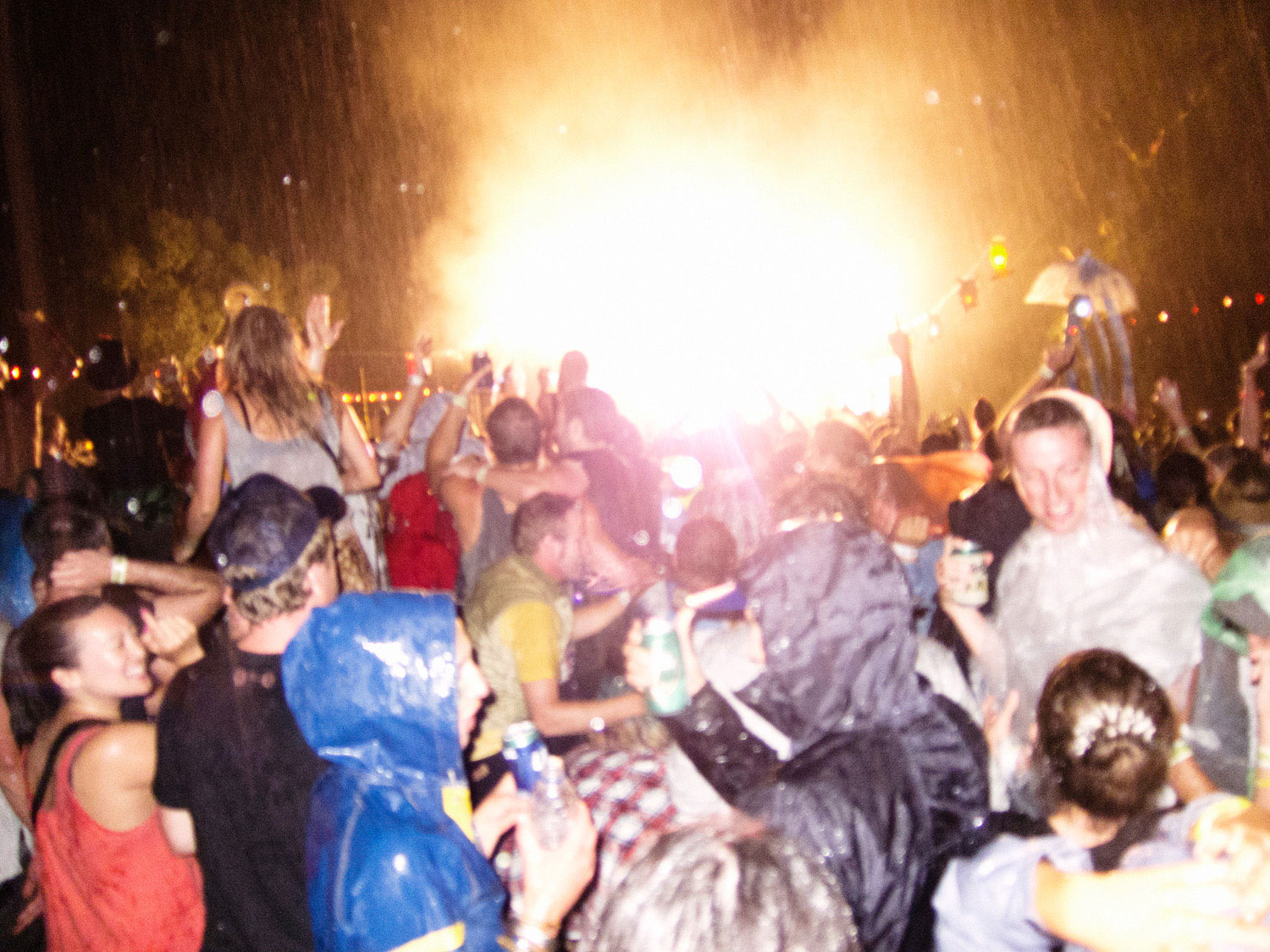 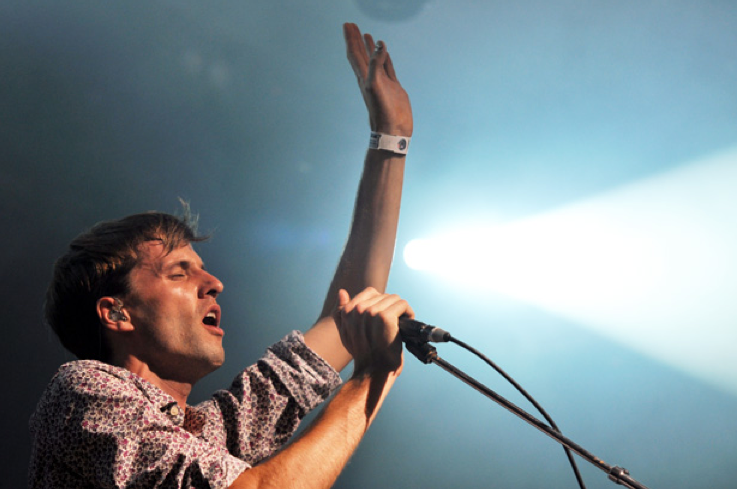 The skies opened up as Cut Copy came on, a little deja vu of the ‘Hearts on Fire’ clip – although one moping dude was instead replaced by a few thousand inebriated people happy to be rubbing ponchos in the rain. The 40 piece choir backing Dan at the ARIAs a few weeks ago seemed a better occassion to justify his penchant for spirit fingers, but the crowd didn’t seem to mind. Andy and Vincent from the Midnight Juggernauts made a cameo, joined the stage for percussion duties and made bro-luv rolling on the stage with Cut Copy during the end of ‘Out There On The Ice’. 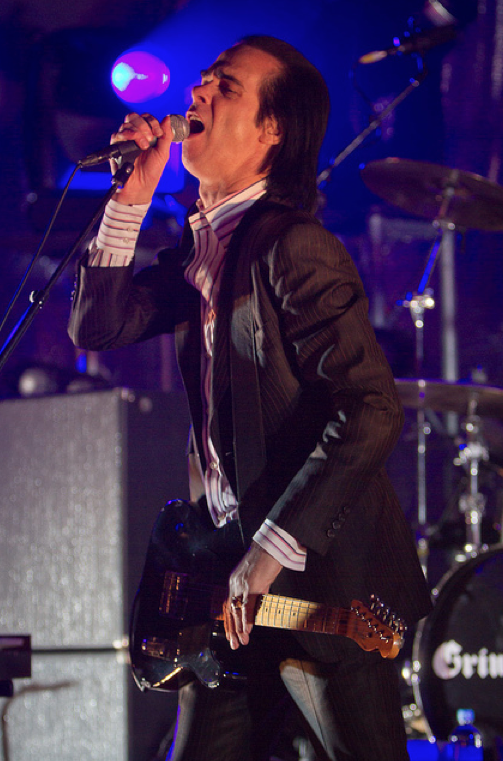 With the rain leaving a trail of low clouds behind, the man of the evening sauntered onto stage. From ‘Mickey Mouse and the Last Goodbye’ to the extended keyboard jam during ‘Honeybee Let’s Go To Mars’, Nick Cave reminded everyone why he’s a national treasure. I enjoyed their last record, but Grinderman still scare the shit out of me. Cave and his gang of brooding middle aged men were just as violating to watch live. ‘Kitchenette’ was easily the best track of the set, notably just as that scathing falsetto turns into with Cave wailing, “I JUST WANT TO RELAX!!! I JUST WANT TO RELAX!!!”. It’s something probably something he’ll be doing a bit more now, announcing the band’s breakup after the last song. Appearing to wipe his eye with his sleeve, Cave mumbled,

“Uh, this is the last of Grinderman. It’s all over now. See you in like, ten years, somethin’ like that. When we’re older and fucking uglier. Goodnight.” 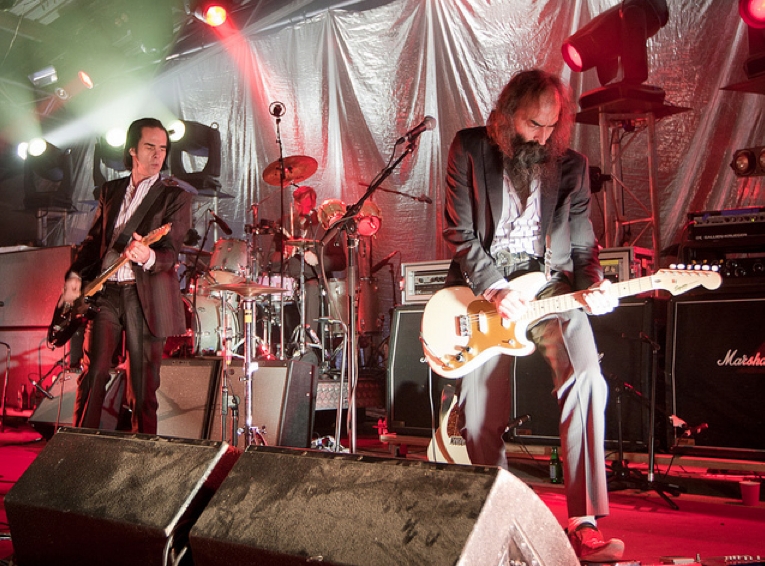 Total Lunar Eclipse may have bailed due to heavy clouds, but there was no shortage of moons at Big Freedia. If you can picture Ja-Rule making bounce music and a 20 piece procession dry humping the air/ freely moving their rears for 40 minutes, it’s probably not even close. No words.

(this isn’t the Meredith set but fast fwd to 1.13 to get the drift) 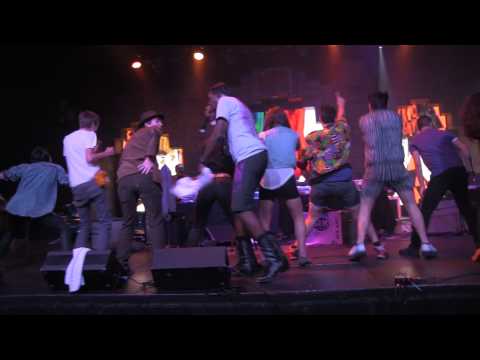 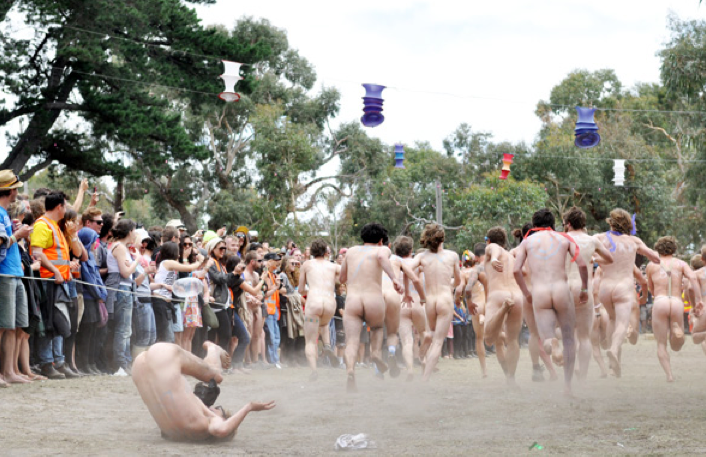 Bandaids don’t fix broken tent poles. Similar to a tarp draped over a corpse, I wake up in a less than healthy state with my soggy, collapsed tent on my face.

The last day is always a downer, but thank zeus for the Meredith Gift. The annual Gift takes place at the end of the festival, where a herd of 50 nude people sprint and scratch each other’s eyes out over a case of beer. Broken ankles, pained faces, ungodly naked handstands and a re-match between a newcomer and the reigning three time Gift winner proved highlights. But mostly, Dennis Commeti’s wit.

Although packing my life into a flimsy nylon dome and eating dust for three days is something I do several times a year, this was my first time at Meredith and I had a ball. A generous BYO policy + a good natured crowd restored my faith in the festival gods. I’ll be back again. 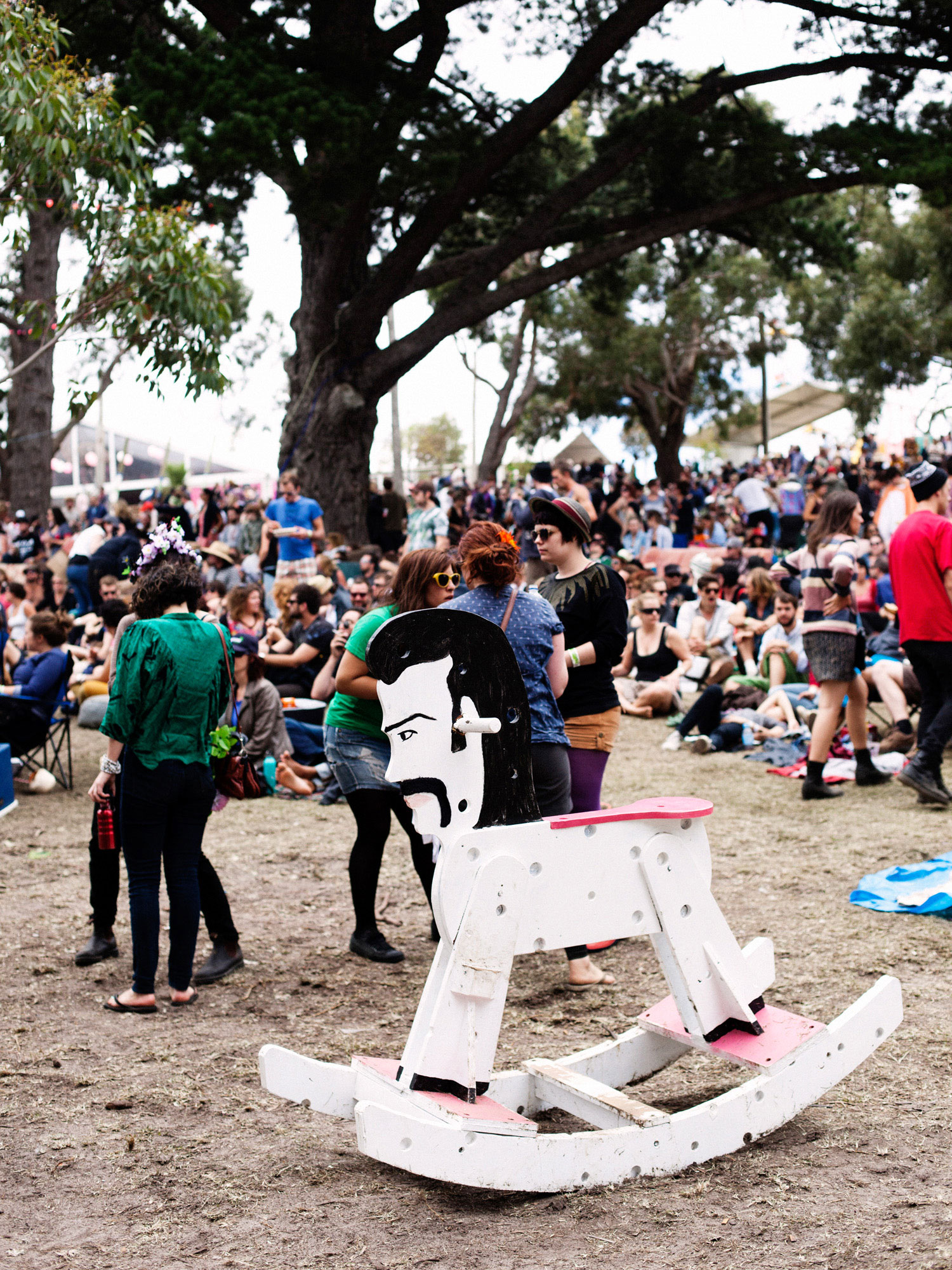 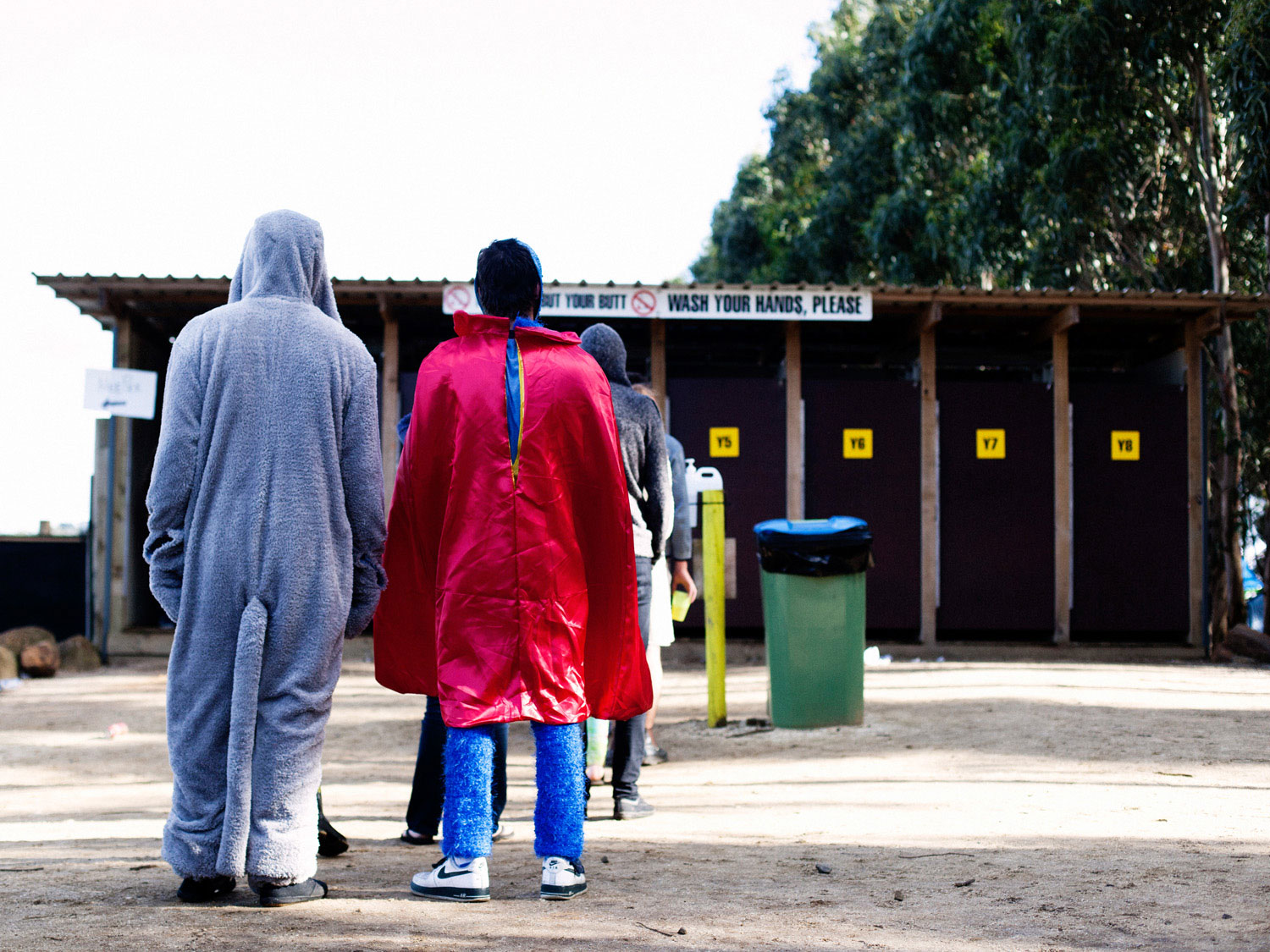 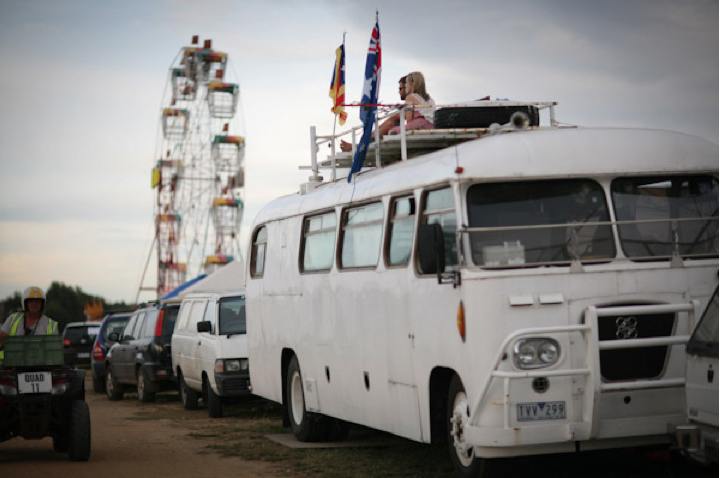