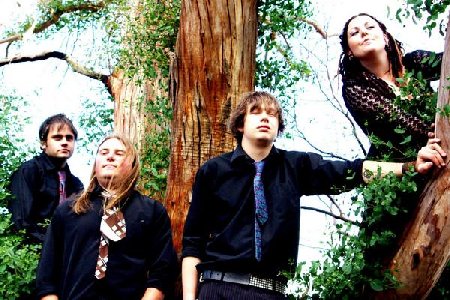 From the forgotten state of Australia, Tasmania (for our international visitors, that’s the little island at the bottom of Australia… and no, not New Zealand), comes Lakoda. Tassie bands traditionally haven’t featured much on the musical landscape because, to put it bluntly, they’re fucked geographically. Whereas bands on the main part of our continent can travel easily (albeit far distances) to different states to reach new crowds, Tassie bands have to travel over water, which means you have to have lots of cash! This isolation means word of your band doesn’t travel much further than the pub down the road.

So I was surprised to find out that Lakoda’s 2005 debut EP – from which ‘Forget It All’ comes from – was recorded at the now defunct (which is a tragedy for the Australian music scene) Modern Music Studios in Brisbane. This band reminds me a lot of current Queensland darlings Nina May with their female vocals, anthemic hooks and love of pop punk and progressive rock sounds. Sadly for Lakoda, that kind of competition is very much a David vs Goliath musical battle, but Lakoda have elements in their music which show a lot of potential. We’ll see what they’ve been cooking up for the last two years when they unveil some new material in the first quarter of ’08.

It’s just a shame for them that they’re stuck in Tasmania.