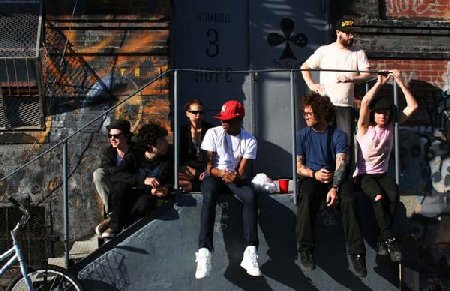 Who would ever have thought that not one, but two Australian/New Zealand acts would scamper up the ranks of cool in London to headline the April edition of VICE Live? A very prestigious party to be playing at, I wasn’t sure if I would be able to secure a door spot through the publications I write for (as neither of them are VICE) so I tried my luck at messaging The Deathset personally. A long shot my anyone’s standard but I was surprised to see that my humble request was met with an enthusiastic, immediate and no-strings reply of “Sure, no problems!” from Johnny Siera of the Baltimore based two piece. No other gesture affirms The Deathset as an act wholly dedicated to their fans than that, though perhaps consciously ignoring the stage in the venue and opting to play at audience level where we could jump and get rough with both Johnny and Peter O’Connell brands this also.

Their 25 minuets set featured tracks off the 2008 LP Worldwide and was as refreshingly raw and free from the pretentious bullshit that cripples SO many other acts. I, and you, should also be proud to have The Deathset as our own. I jumped and flailed and have no reservation in announcing that I had never been so impressed by an Australian band for opting to do something outside the expectations of regular performance, with songs that crack ferociously into everything rock’n’roll and watered your enjoyment at being strangled by a sweat soaked guitar lead, Deathset are by far the most exciting Australian act I have witnessed on English soil to date. Give them your energy, time, money, but most of all, your love.

Playing just before them was Kiwi songbird Ladyhawke, who was looking every bit the doey-eyed lovechild of Kurt Cobain and Stevie Nicks. Indeed, she had a the entire room interested in what she was doing but whether it was the fact that her fully fledged rock band drowned her reserved vocal melodies out, or that her electronic run of the mill pop was slightly dated for the London scene, I noticed the crowd start and continue to thin from the second song in to the very end. Though with the backing of the increasing hip Modular Records behind her who knows? I think ‘Professional Suicide’ is a wild DJ track, and speaking of, somewhere within the blurry house of the morning, I happen to hear a voice I haven’t heard for quite sometime. I learnt it was the Cut Copy remix of Mercy Arms’ ‘Kept Low’, mashed in with a plethora of other overhead disco tunes. Indeed, the Cutter boys have recently visited London and enjoyed the perks of a very successful club tour, which had them show casing all their new stuff to rooms packed with munters and dance music fans alike. Cut Copy have tapped into a wonderfully big and euphoric song writing structure that works like a dream in these big catacomb clubs of London, appealing to mass crowds.

Other acts worthy of noting is Midnight Juggernauts, who’ve got a major EMI backing (or so I’ve been told) but are working equally hard to expand their fan base further than purveyors of French electro. And when I say working hard, it’s a way of recognising Australian bands that think beyond the perimeters of Australia and take the chance at becoming an international success by doing LOADS of shows in the usually small amount of time they are here for. It’s a flooded and incredibly competitive market that’s quick to snipe at and even worse, ignore bands that don’t make the effort to do the hard work, so mention must also be given to Cut Off Your Hands and Angus and Julia Stone.

My final word are for Perth drum and base act Pendulum who, after having and early listen to their soon to be released follow up to Hold Your Colour titled In Silico at an exclusive label listening event, I’m certain they are going to have all rave-heads and dance fiends going ballistic the Summer, UK that is. It’s a heavily guitar focused record that will certainly be a smash this side of the world, and I deeply encourage everyone in Australia to go to one of their upcoming gigs and have a sample taste of what’s going to be a HUGE year for the Perth lads.

That’s it for now, from the U.K. Tasha x