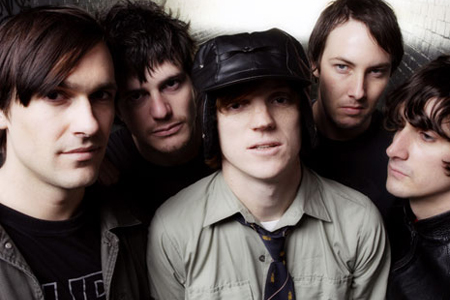 Sydney based Faker had a troubled start to their music career. Singer Nathan Hudson allegedly fired the entire initial lineup and had difficulty settling on permanent band members. Rumours of being difficult to work with started spreading around, and for a moment it seemed the band was never going to get anywhere. Many people in the music scene were surprised when their debut album Addicted Romantic came out; a strong collection of new tunes and reworked old favourites that showcased a band who’s not only very tight but seemed to show promise of lasting beyond a debut album.

I’ve met Nathan a few times and he’s very likeable and easy to get along to, nothing like what I heard from rumours. On stage he gets pretty wild, I’ve watched him carry songs while hanging off a speaker bar upside down ten meters off the ground without missing a lyric. The first and standout single out of this album is ‘Quarter To Three’, a very Cure inspired tune that was so in time with the rock scene’s obsessions of early 80s dark tinged sound at the time of its release. There are other standout songs in the album, some sounded like they’re written specifically for mainstream rock radio. But this song has that long lasting timeless quality about it that will outlive this album.