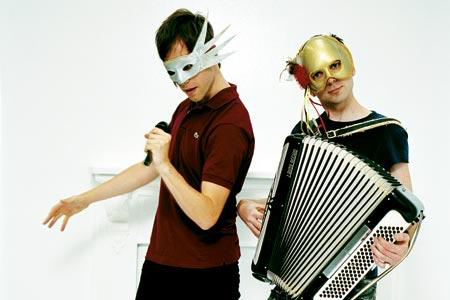 The phrase ‘Who the bloody hell are they?’ doesn’t exactly apply to The Presets.
The Presets are ubiquitous. But I feel it’s time to reflect. This stinging, funny, and irritatingly smug review in Pitchfork from a few months back was my catalyst. I felt surprisingly wounded after reading it. Dismissing something on the basis of its association with the ‘scene’ is a bit rich coming from Pitchfork. Just as the ‘record’ seems secondary to the ‘label’ bit of the aggressively fashionable Modular, Pitchfork itself is a brand. Oh what a surprise, the solo multi-instrumentalist with the personal mythology has captured your hearts! But should the merit of individual writers be detracted from just because the aggregate sum of their ideas is an occasionally bland consensus made easily digestible for the indie set? Should the work of The Presets be hated because it has been bastardized by a skinny jean wielding majority?

Their name itself suits this analysis. The Presets: neat and inoffensive, so obvious I can’t believe nobody else thought of it earlier. It implies autopilot, not really having to think about anything. Herein lies their marketing strategy: their aesthetic is polished and very exportable. Offering the hipsters from Berlin to misshapes in New York a cosy feeling of familiarity, The Presets are able to ride on this (new) wave of scenesterdom.

The local release of their 2005 album Beams was met with big sales and strong reviews. In hindsight, it’s not a very coherent listen. On one hand there’s a satisfying, suave, OC-included pop gem like ‘Girl and the Sea’. But then we have to endure really tuneless experimental numbers like ‘Worms’ which could get away with seeming gothic-glam in the haze of a seedy indie club, but it kind of makes me squint in the harsh light of day. Hear the good one above, though it’s such a pity I wasn’t somehow able to offer The Presets iconic Tsubi skull t-shirt up for download- our site viewing figures would’ve soared!

But back to the Pitchfork review (not that I care what they think or anything). What it missed was a sense of was what a good gig the boys put on. Julian Hamilton’s liquid robotic vocals ground Kim Moyes’ mild behavioral problems (the violent shoving of unauthorised stage-goers at one memorable show I saw, for example.) But it’s the redemptive power of the clear synths and the booming bass that have captured some sort of zeitgeist. And it has proven just as appealing in the Northern Beaches as the grubby inner-city of Sydney.

To be honest I’m sort of annoyed at myself for feeling the need to undergo this public ritual cleansing of Presets mania. This desperate bid to contextualize is unfairly holding them responsible for everyone else’s reactions.

Just like the bland, dialogue-driven Australian film that has the mandatory wide shots of beautiful landscape and therefore finds itself on the receiving end of all sorts of off-putting noises from an over-enthused Margaret Pomeranz, perhaps we occasionally err on the side of giving new Australian music too much benefit of the doubt. Just cos it happens to tick a few boxes, references the right influences. Then Pitchfork tells us it wasn’t that good in the first place and the backlash begins. Fast-forward and “Skinny jeans” becomes the call-cry of lazy, debilitating self-conscious writers who use it to distance themselves from a sub-culture that’s under attack, as though they’ve never scraped on a pair of drainpipes themselves. Clearly I lost sight of the possibility of conclusion long ago; I guess I’m just insuring myself against the prospect that the bands I’m gushing about on this blog today now will probably be the beneficiary of Pitchfork bile tomorrow.

In a way I am kind of intrigued to hear what The Presets do next and how they handle the burdens of their own success.