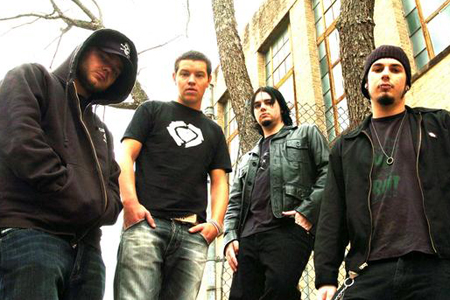 No your ears don’t deceive you – there actually is a metal band being posted about in the predominantly indie-dominated blog scene. Let’s face it, metal ain’t the most popular genre at the moment. But that doesn’t mean there aren’t good bands out there, and Sunk Loto is one of them. These guys have had a very rocky history – they were signed to Sony at around the age of 18 after winning a band comp in Queensland, they then released a fairly popular EP entitled Society Anxiety, and followed that up with the less well-received Big Picture Lies LP, both of which were heavily nü-metal influenced. They were being pushed by their label to be the next Silverchair, and were gaining huge supports and travelling around the country on the Big Day Out tour.

Two years after the release of Big Picture Lies they dropped the pummeling Between Birth and Death, a complete 180-turn on their previous style. Instead of nü-metal, accessible songs, Between Birth and Death was a full-on metal album inspired by the likes of Poison the Well and Killswitch Engage, and dealt with issues such as a friend’s suicide, drug addiction and divorce. Of course, the old material was at complete odds with their new material, so the old fans didn’t like it and those who would of liked the new material had already been turned off from their old stuff. Geddit??

So the band were struggling with a falling popularity, as well as dealing with managers who were ripping them off. Then the SonyBMG merger resulted in Sunk being dropped from the label. Recently, the band lost their long-time bass player Sean Van Gennip, who has now been replaced by ex-Full Scale bottom-ender Robkaay. But now the band are about to hit the road with Cog and Mammal, and are holding auditions for a second guitarist and writing for a third album. So maybe things are on the up. Let’s hope so.