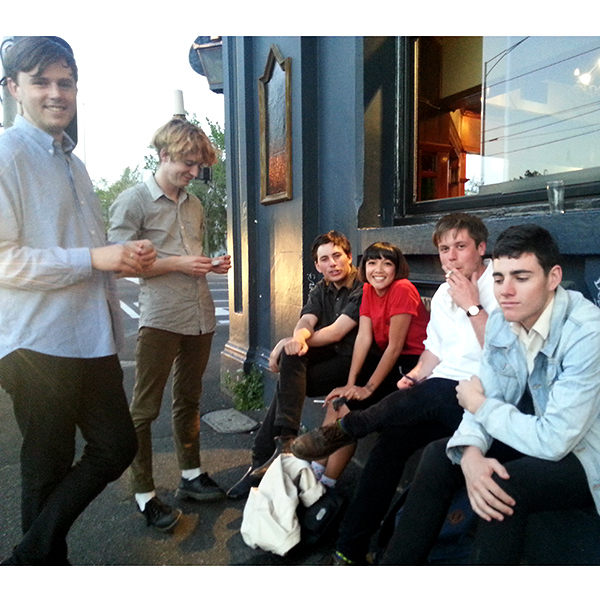 Next up is the title track ‘Split’. Much has already been written on this one but let’s note the vocals of young blood Zac of Ciggie Witch. “I am really happy with how it

turned out. I wasn’t originally happy with split being the first single as it was the first Ocean Party track I have ever sung on but I was happy that most people liked it”, Zac says. He totally nails the yearning for something more we all feel during our day jobs. He mentioned that he felt a little more pressure than everyone else, which may have worked for him because ‘Split’ is a major highlight on the record.

‘Found Out’ is Lachlan’s first track and he brings the charm of a great confidence, which he says came from the recording process “I really enjoyed recording this album and actually stressed less than I did with others, maybe because of the environment of recording it at my grandparents farm or maybe because the pressure was spread so evenly”. The writing on ‘Found Out’ is short and punchy. It rolls along in licks and together with the backing harmony; it’s very Australian.

Being the ever democratic band that The Ocean Party are, ‘Every Decision’ is sung by Liam ‘Snowy Nasdaq’ and his tone is a nice change to the first few tracks. “I think in a lot of ways there are more subtleties in this record, in the lyrics and variety of sounds in the synths and guitars,” Liam comments on the sound of the record. I agree it definitely has depth beyond a jangle and this one is a really complex love song. His other work is often more abstract but ‘Every Decision’ has a neat little slap of frustration as it plucks away in an honest sigh.

‘Grass Cuts’ has a lovely chorus contrasted with a sharper twang and droll vocals that ease you into the second half of the record, which I reckon starts with the aches of disorientation in ‘Chinese Takeaway’. It’s a heartbreaker. The opening few lines suck you into a very personal story of self-reflection that leads to a tantrum of emotion that left me dizzy. One of my favs off the record.

Jordan talks about the recording process in more detail and mentions how important it was to have prepared by recording demos in the months leading up to heading up to the farm. “When we got to the farm and started recording it really felt like all of the songs were well considered, and we were confident with what everyone was playing – no half cooked songs”, he says. ‘Race On’ was written by Jordan and is the freshest sound for The Ocean Party. The climbing chorus has a strange mix of Christian optimism and 80’s wall of guitar noise. I really dig the vocals on this track. He also explains how everyone being involved in each other’s songs brought a new element of interest. “Ideas were very communal but working on a basis which was more personal for each songwriter, so coming to terms with what everyone’s songs were about or where they were coming from musically was interesting and still is with each listen”.

It also goes a long way to explain how tracks like ‘Got it Wrong’ came together so well. Lachlan handed the vocals over to Curtis on ‘Got it Wrong’. The storytelling is as bleak as anything Nick Cave would jerk off to in his penthouse. The arc of the track features a nice drop in tone sounding like something from the early Velcro tapes but with more layered harmony. It’s a confession. An honest minute. One of redemption in the closing moments of a misspent life.

It’s hard to move into another bleak number after ‘Got it Wrong’ but ‘Straight Face’ manages to get you going despite it’s downer vibe. The lyrics are spat in a friendly way. Like one might do onstage or when running, rather than like a ladette does at a bouncer.  Into the home stretch brings us to ‘Water’, a love song written by Lachlan about missing Curtis when he broke all our hearts and ventured over to North America. It’s a sweet melody that knows a happy ending is coming. It would’ve been fun to record with Curtis back in the room.

“I said something stupid that I didn’t mean. I take it back, do you think less of me?” ‘Something Stupid’ is a sweet pop song. Skillfully executed with Curtis on vocals. “After the last album I really wanted to try out some different stuff while recording this one, nothing far out just some more over dubs, some extra keyboard lines etc”, says Curtis of the recording process. This is best heard in ‘Outside’, the second song written by Jordan and then recorded with the band on the farm. His work on the record made its mark with ‘Race On’ but this one extends the sound of Split by giving it a little more depth. ‘Outside’ is a strong closer and confirms another fine recording from the Osbourne Street BMX gang.

Finally, this was a bit of an extended post for me. I’d like to thank you all for staying with me because this is actually my last written post for who the hell. I have been blogging here since 2009 and feel it’s time to wrap it up. So thanks for reading xo.

The Ocean Party are touring Split during November and will be hacking our Instagram to share the memories. Get along to one of these shows: