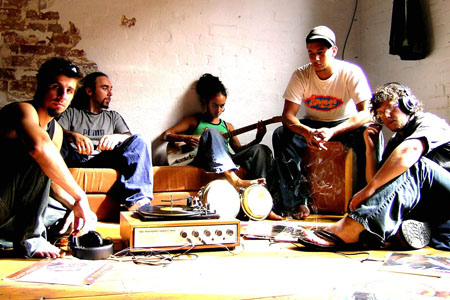 I’m not a big fan of the roots music scene – I can’t tell much difference between the songs. They all seem to revolve around politics, anti war creed or legalising weed. The message is usually about getting along with one another by way of discouraging racism, sexism, classism, materialism, or any other (insert here)-isms. Don’t get me wrong I’m not an ignorant bigot – I’ve had my share of discrimination. It’s just that I get tired of listening to acts who are hell bent in getting their ‘message’ out there that they don’t work hard enough on the melody or the actual music of the song.

So I was quite surprised to be cruising along in my car when this song came on and I really enjoyed it. Blue King Brown has managed to put the rhythm, melody and beat so far in front in this song that they are the highlight, not the message. And that’s the way it should be. Two members of the band are originally from Byron Bay but they packed up and drove down to Melbourne to find the right crew to eventually form the current line up. They play all the usual rootsy festivals like The Great Escape, Blues and Roots Festival and Woodford Festival, and this month are the main support for Michael Franti’s Spearhead national tour of Australia. As suspected, they are active in the political field, and they have important messages in all their songs, but it seems that aspect of songwriting isn’t so full on as Spearhead. The female voice makes it a much easier listening.