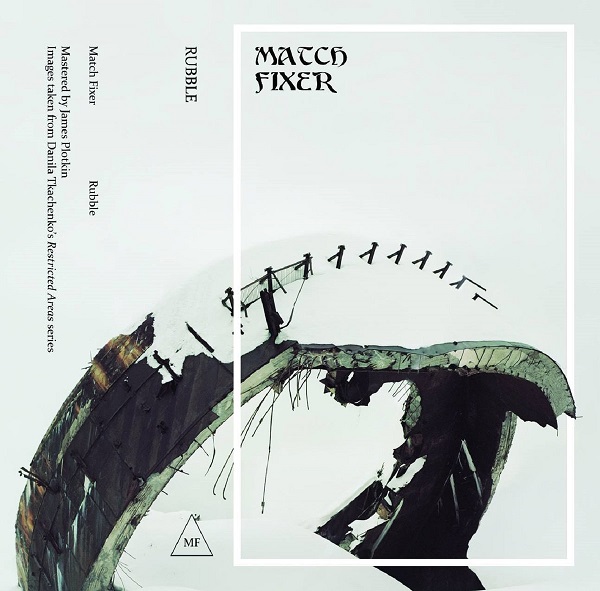 As Match Fixer, Cowie occupies a somewhat similar musical realm as with Angel Eyes but with more focus on rhythm and less on the abstracted pop elements of the aforementioned project. The atmospheric synths remain but the cavernous vocals and processed guitar are replaced with crunching percussion and forensically assembled sonic detritus.

Following his amazing 2014 split with Glass Bricks and more recently, the Attempts EP via Nice Music, the aptly titled Rubble is far more complex each piece layered with a manic intensity. The title itself could easily refer to the harsh percussive elements, which sound as if they have been torn from a metal scrapyard, or to the curious sounds emerging from some vast, smouldering wreckage.

Where the split honed in on an idea and slowly developed it over time, Rubble seems less disciplined instead moving with a restless energy, ideas teased at, sometimes quickly abandoned, other times revisited and fleshed out further. Dynamics are key here, shifting from an anxiety fuelled overload then stripped back to exposed and unassuming rhythms left to stutter away while various other elements drift in and out of the mix.

It seems obvious to draw parallels with outer space or science fiction, but to me there is an undeniable link. A link further reinforced by the cover image, which at first glance could be the remains of a destroyed spacecraft. Taken from Restricted Areas, a series of photographs by Russian visual artist Danila Tkachenko’s, the images depict abandoned structures and harsh frozen landscapes which could provide the cinematic backdrop to some stark, future dystopia. A scene that could very well be soundtracked by Match Fixer.

Rubble feels epic in scope, each piece intent on travelling its own path while remaining part of a greater whole, like some amorphous organism with its expansive colonial networks. The album is available digitally and as a limited edition cassette via the Match Fixer bandcamp page here.