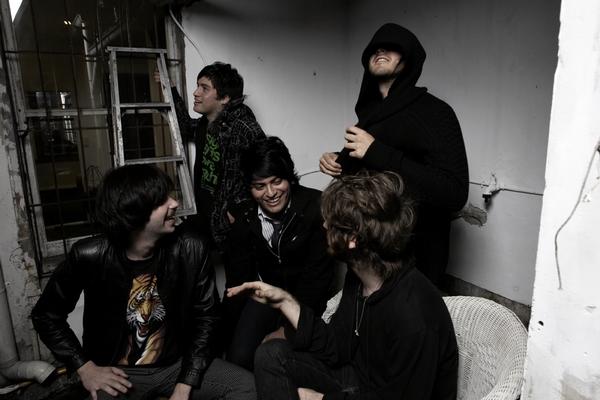 What more need I say about Lost Valentinos? You’ve read about them here previously and probably on several other sites as well. They’ve been inviting media attention for a couple of years now but they’ve only recently announced details of a long-awaited debut. Suffice to say, we’re shivering with anticipation.

‘Midnight’ is another exercise in indie-meets-dance, again featuring great production courtesy of Berlin-via-UK producer Ewan Pearson and again sounding like they’re spending equal time figuring out arrangements as guitar pedal settings. Whereas other bands try to achieve a blend between rock and dance by mixing guitars and electro pop, these guys go for straight dance like deep house and work pop arrangements into the repetitive, grinding structure. Opening with a rubbery bassline, ‘Midnight’ soon moves to sound like a Stone Roses offcut with spaghetti western guitars replacing John Squires’ ‘wah-wah’ fuss. These guys have really mastered the art of surging rhythms, which push forward unrelentingly until a brief respite in between parts 1 and 2, only to re-emerge as a four-on-the-floor house beat.

I’m less excited about news that their album will be a concept record about finding a lost city of gold in a volcano on Mars or something. Still, ‘Midnight,’ ‘Serio’ and ‘The Bismark’ bode well for things to come. Seriously, at three singles deep this album is still sounding like total winner. Hopefully they can maintain that streak.