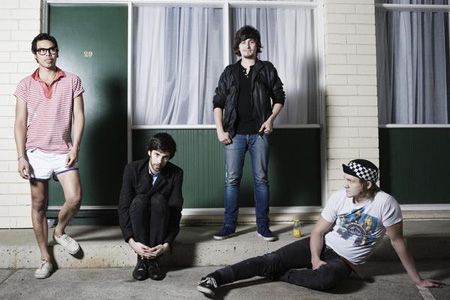 Ok so after 5 weeks in Melbourne I finally have broadband, a working computer and time to blog again. It has been frustratingly slow to resettle in Australia’s 2nd biggest city, but I’ve used that time to get out and familiarise myself with the local scene. In Sydney every second person I meet is a DJ, but here in M-town, everyone is in a band. Which is good in a way, but also means that there are a lot of shit art school bands playing around the numerous venues.

Fortunately I’ve found a few gems. One band of Melbournites that stand out from the cacophony are the Temper Trap boys. They used to call themselves Temper Temper but apparently there’s a few other bands in the world with the same idea. A few weeks ago I met Dougy the singer while hanging out at St. Jerome’s laneway bar, home to the annual Laneway Festival, a very indie, small capacity gathering that tops at 2500 capacity in 3 cities next year in early 2007. Turns out he’s from Bali. Doug has a voice that cuts through any given room. They very recently put out an EP on Liberation Records and are playing some shows around town. They will be in Sydney this Saturday playing at Spectrum with Triple J Unearthed winners Young & Restless. Catch them yo.