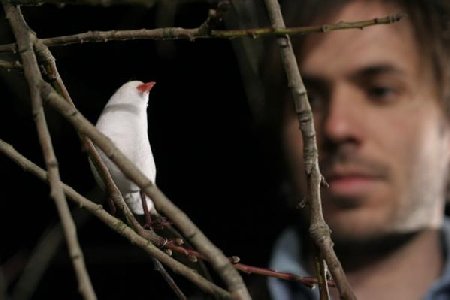 So, there’s been some whiplash from The White Room post, and I’ve learnt my lesson about overhyping bands. Sort of. In the spirit of fair blogging, I’ve signed up to Superlatives Anonymous to get help. To pass the time between meetings, I’m going post on someone else I think deserves a mention; who ISN’T from Sydney, but Jerry’s new hometown of Melbourne.

I discovered Justin Grounds during one of those typical 3-am-too-drunk-to-sleep-myspace-trawling evenings, and I’ve been hooked for a while. I guess I’m just a bit disillusioned with the whole spiky-indie-retro thing going on at the moment and finding someone who just writes proper songs is a breath of fresh air. And it’s also cool because it doesn’t lean towards that uber-popular brand of alt-folk that only very talented guys like Ryan Adams can pull off. Simply put, it’s a nice white boy crying his heart out – and there’s always room for more of them, if they’re good enough. This guy is going to be slapped with some rampant comparisons to fellow lost souls Nick Drake and Jeff Buckley. His voice leans more towards the latter, and he’s also got some serious proficiency on the guitar. And there’s some whacked out hippie lyrics happening, which is rad ‘cos you can start hypothesisng about whether Justin had his heart broken by some vegetarian mystic named Moonbeam. Pretty much, it’s chilled music for the soul. Nuff said, go have a listen.

Leave a Reply to Dom Alessio