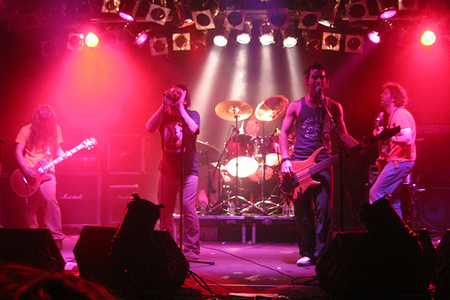 It’s like the episode of The Simpsons where Apu is living with them, and his mother comes to stay and Lisa and Bart ask her “what’s with the dot?” Well, we could ask the same about .hinge, this rocking Melbourne five piece. They’ve been kicking around the Aussie alternative music scene sicne 1997 and musically they keep going from strength to strength. Their debut album Something To Adore was listed in the Top 10 albums of 2005 on DecoyMusic.com.

I’ve always been a fan of vocalist Glenn Johnstone and he performs even better live. Also, the guitar work of Rob Crimi and Brock Collins is reminiscent of the interplay between Billy Corgan and James Iha. .hinge don’t follow conventional song structures, but they still manage to create rock songs interwoven with intricate, effected guitar. Oh yeah, and the bass and drums groove along fantastically too! Check out the song ‘Cut The Cord’ from Something To Adore.