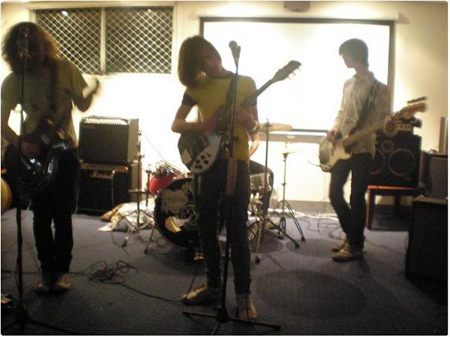 Youth! Youth! Youth! That’s the one thing that I love more than anything about Ships Piano – well that and the fact that they’re laying down some pretty sweet tracks.

These 4 brash teenagers from the outer burbs of Melbourne produce the kind of angsty garage punk that reminds me of a young At The Drive-In and are quickly making a name for themselves in the local scene as being kids who possess the sort of talent that the rest of us can only wish we had when we were 15. With a great and often improvised live show teamed up with the unashamed and brutal honesty that Ships Piano hurl at the listener the boys have already landed slots with British India and were invited to play last year’s ‘Summertones Festival’.

Their latest offering ‘Acrobats Tumble’ features the desperate wails of front man/boy Sebastian (the kind that only a pre-pubescent teenager could find in their stomach) and is coupled nicely with some simple yet affective riffs that followers of Ships Piano have become accompanied with.