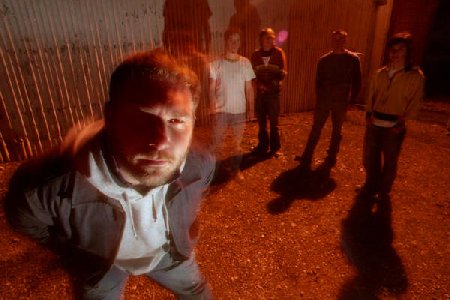 Mr Wednesday – ‘On The Tail Of Day One’

Hailing from Adelaide, Mr Wednesday play music that sounds like it’s eminating from a distant radio, from a time or place not of this world or universe, perhaps residing in another universe or another brane (depending if you’re a believer of String Theory).  It’s the music of old ghosts, of hazy memories; emotive, moving and haunting.

Call it what you will – post rock, perhaps, though it’s probably the least-favoured genre tag in all of music – but Mr Wednesday create ethereal pieces of music that gracefully wander along.  There’s no definitive structure, with the music lacking any remnants of verses or choruses.  The tunes are densely layered affairs, making use of soft piano melodies, reverb-soaked guitars, lush strings and what their bio aptly describes as “corroded electronics”.  You could point your finger at acts like Mogwai, Godspeed You! Black Emperor, Mum, Radiohead and Boards of Canada as influences on their ambient movements.

Their debut album The Garden Where Parties Grow resurrects the long-lost art of the concept album.  The album is described as: “a thirteen-track album that follows a three day sequence in the life of Mr Wednesday as he comes to terms with the world according to Mr Industry. To put it simply, the title is the city. An almost uninhabitable place where social functions form the breadth of existence, work is a means to success and the art of being seen is an enviable talent”.  Self-indulgent, perhaps, but beautiful nonetheless.