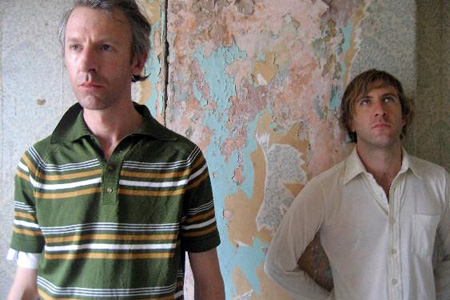 Rand and Holland – ‘Night is Only Young’

Last week Rand and Holland’s manager Eliza emailed me about their new stuff and warned me that this was more folk oriented than the kind of music I usually blog about. She’s kinda right, but I was a big fan of acoustic music and can still appreciate good songwriting over the now dominant beat in modern songs that’s oh-so-now. I’ve heard of these guys before and I have their previous recording. I wasn’t so impressed and I guess it’s very easy to be ageists when it comes to evaluating music – listening to hundreds of demos a week gets the ear tired pretty quick.

But Night is Only Young is a true gem of a find. Although the subject matter is about late night hanging out, somehow I get the feel that if I were to listen to this song on Sunday afternoon nursing a hangover, I would just feel better. It’s soothing. It makes things slightly easier. It would remind me why I drank so much the night before.

I don’t know much else about the duo, except that their record will be coming out on the prestigious Spunk label who is also home to locals Clue to Kalo and Holly Throsby. I’ve yet to hear this track on the radio, so hopefully someone will pick it up soon.