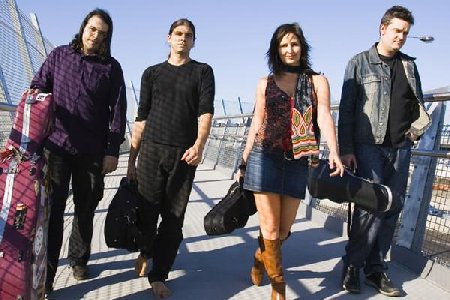 FourPlay describes themselves as a “Sydney, Australia based indie rock band who happen to be an electric string quartet”.  And I couldn’t put it much better myself.

This is not your average string quartet.  In a similar vein to other string quartets such as Kronos (the troupe who composed the score to Requiem for a Dream), their style and compositions are quite non-traditional and left of centre.  Also, a typical string quartet is made up of two violins, one viola and one cello, whereas FourPlay use two violas, one violin and one cello “to produce a thicker, deeper sound”.

They’ve also been known to do some amazing cover versions of popular songs, such as The Strokes’ ‘Reptilia’ which I’ve posted with this blog.  They also do a stunning version of Radiohead’s ‘2+2=5’, which is one of my fave Radiohead songs.  Their most recent album Now To The Future came out last year and you can hear a few tracks from that on their MySpace page.