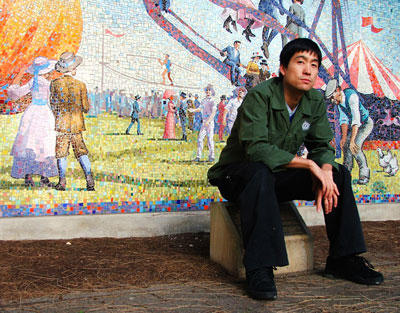 I’ve been meaning to write on the elefant traks crew for a while now but I never really had the time to properly research them and their extensive crew of producers, rappers and beat makers. One of these guys is Unkle Ho, a member of the hip hop group The Herd, who has released an album previously in 2005, but still largely unknown in the music listening public in Australia, ie Triple J listeners.

As the press release goes, Unkle Ho was born in Hong Kong but moved to Sydney when young, and has made beats and design graphics for the Elephant Traks crew in general. This track does not show any hint of hip hop leanings but instead gives away a rich sonic melting pot of Asian instrumentation on top of a jazzy rhythm, the melodies cut up so fine it feels almost organic. Perhaps it could do with some singing on top of the beats cos I was waiting for vocals to kick in to lift up the track. But maybe it’s better leaving it as an instrumental, as a showcase of his production skills. This guy is well worth investigating more.