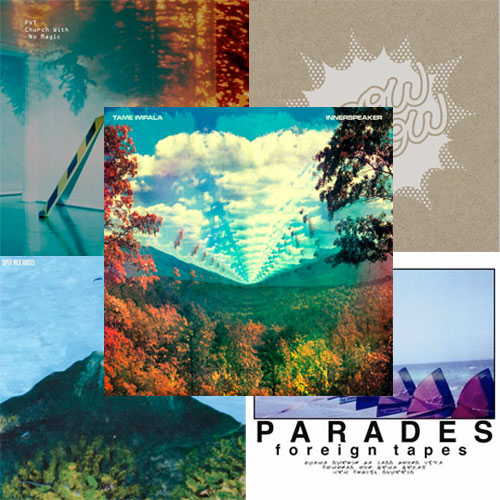 Over the last week I’ve been putting together my personal list of fav albums so far this year. Because everyone loves a list. This is what I came up with after some chopping and changing. Not sure about the other contribs, hopefully they can weigh in as well.

I don’t know what more to say about this album. Some people predicted greatness – for me, it came way out of left field. It managed to cut through a cloud of hyperbole and get me excited about guitars again. Deserves to be number one because it really is an “album” – it works best as a whole and rewards repeated listens.

This is solo project of John Hassell from Seekae. I love Seekae, and a lot of the stuff I love about Seekae is retained here, yet Hassell feels joyously free from the icy aesthetic that defines his main band’s music. As a result, we get track’s like ‘Lioness,’ which are no less technically impressive but far warmer and inviting. It’s the most immediate thing on there, but not even the best. Delve deeper if you enjoy the above.

3. PVT: Church With No Magic

I think technically this album is released in July so shouldn’t be counted, but I’ve had it floating around since May and I’m already well familiar with it’s glory. Above is ‘Window,’ the track that will probably take PVT to as large a following as they’re likely to ever amass. There’s other songs on there to equal its pop prowess – and extended jams to appease the older fans – but all you need to know is this album is kinda the balls.

Foreign Tapes is a dense album and it took a few listens to sink in. I knew the first few tracks prior to diving in, but beyond that it all seemed a bit messy and it kind of washed over me. The genius of this one dawned on me about a week after first listening, and it began with the song above. I came to realise that there’s nothing messy about Foreign Tapes, just a lot of intricacies to the arrangement and some impressive stylistic diversity. And yet somehow the whole thing hangs together extremely well as an album. ‘Loserspeak in New Tongue’ is everything I love about this album in one song.

Another one that I’m pretty sure is technically not the first half of the year, but it’s all I’ve been listening to this past three weeks so it deserves a spot. I actually reviewed this album for the next issue of JMag and gave it a positive but not entirely gushing review. Having lived with if for a couple of weeks longer (and freed from the deadline constraints of print media), I can happily say that this album is proving to be much more of a gem than I first credited it as. Give it time and it may even climb higher up my list. Honestly, I can’t fault the first five songs on this album – they’re as solid as anything else I’ve heard all year from anywhere in the world.

My picks for the best up-and-coming Aus acts and international albums after the jump:

These are the five young artist’s that have impressed me most this year. I can easily see several of these bands getting pretty big over the next couple of years (one in particular – begins with ‘Guinea’ and ends with ‘fowl’). Below are the killer tunes that made me sit up and take notice.

O/S stuff that has rocked my world this year (heaps aye):