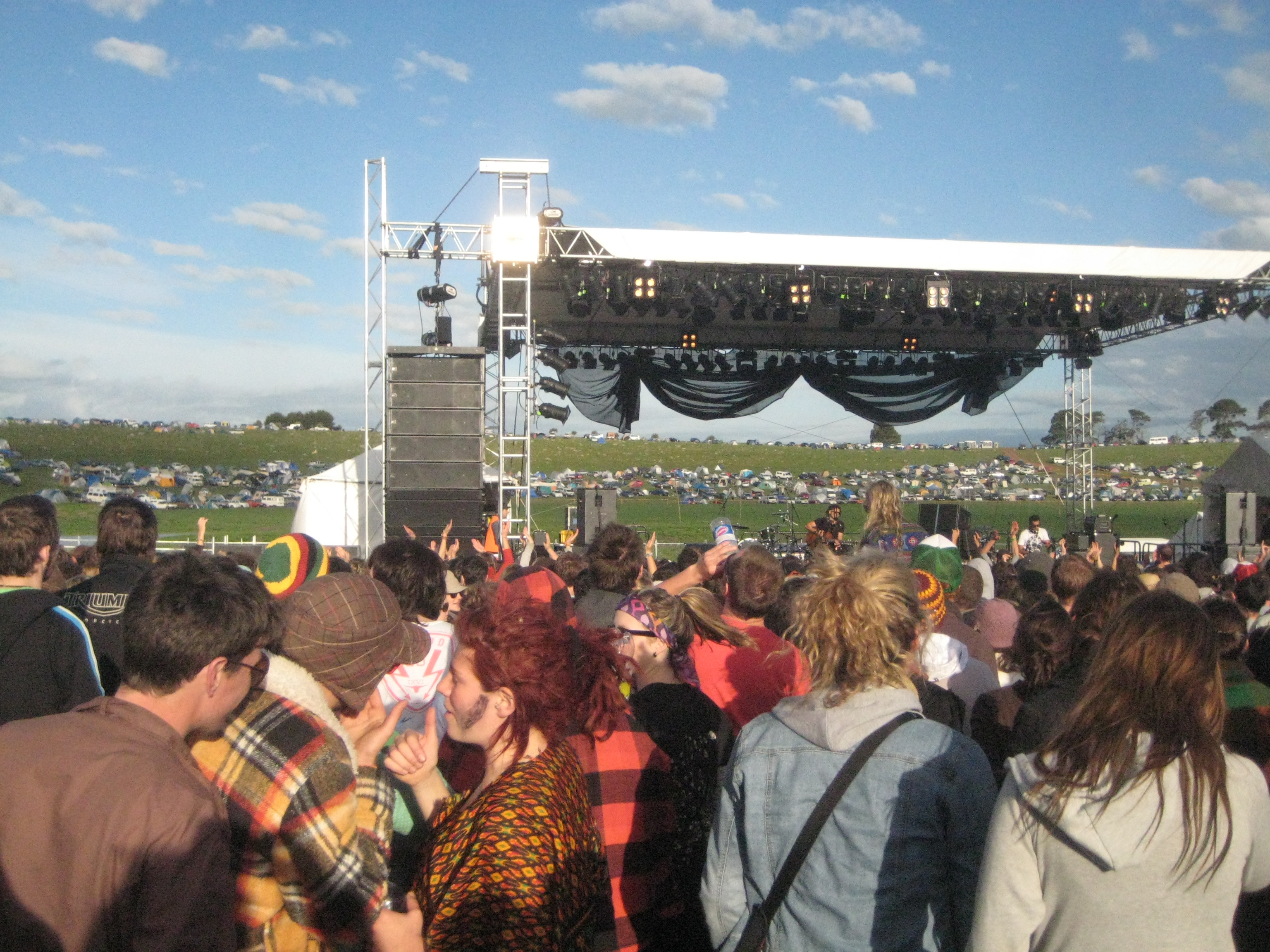 Debuting Blueprint Festival offered a hearty dissection of new and old Australian music in the placid setting of a rustic volcanic crater in rural Victoria. We were promised top notch facilities, cheap food and drink, and a musical journey shy of festival pretentiousness and annoyances like warm, expensive beer and bullshit toilet lines.  It called out for cheap-seeking students and tourists and was a mecca for dreadlocked rootsy folk.

Musically it was something of a mixed bag.  Stalwart Aussie rock icons like Jebediah and Blue King Brown joined an impressive crop of up-and-coming acts.  One of the first acts we saw was Melbourne six-piece The Hello Morning at the unassuming Syn stage, and they simply blew us away with seductively flowing psych-toned and alt-country tinged space pop. Lead Clifford Stevens, a clone of Johnny Cash in style and substance, and the incessantly beaming guitarist Matt Smith, provided an alluring face of the band.  Engulfing slide guitar hazes, organ fuzzes and soulful harmonies would ease you into complacency, then the horns and guitar solos would strike for epic finales.

Melbourne hip-hop Latin hybrids Labjacd spectacularly threw everyone off guard, flicking from horn-laden Latino jangles to more potent Hispanic-infused back-and-forth raps. All the while Alfie Vielma steered the perky 9-piece through the mashup with precision and speed on the decks.

Switching from the Syn stage to the RRR stage we discovered one of the true wonders of Blueprint Festival: mud. Not ordinary mud – it was mud that you would sink into but never penetrate. I’ve never seen anything like it. Throughout the weekend grown adults would frolic in the mystic mud, captivated by its gooey brilliance.

At the RRR stage The Beautiful Girls basked in rootsy glory. Their set was void of chilled out lulls as the outfit catered for an evening crowd willing to get their dance on. Crowd favourite Blackbird set the masses bouncing to a smooth reggae groove, as ladies consistently pleaded for lead Matt McCue’s babies. Next up veteran rockers Jebediah drove the crowd into frenzy. The ensuing mosh turned mystic mud into mischievous mud as many a shoe were lost. The band delightedly showcased more ambitious new tunes alongside punky classics like Harpoon, which the crowd gulped down with nostalgic vigour.

On Saturday we sluggishly took to the hillside, enjoying the sun and leisurely taking in the RRR stage happenings from a distance. The Basics drew us closer to the action, fluctuating between swinging 60s pop and gritty indie anthem. Ash Grunwald miraculously summoned stagnant factions of the crowd into his groove. A reinvented Ash pushed his token blues twang in a seriously funky direction, joined on stage by beat fiend Kanchana Karunaratna on a drum machine.

A bitter night was kindled by some luscious lentil soup and fiery sets from Bertie Blackman and Blue King Brown.  Bubbly Sydney girl Bertie Blackman doused the crowd with Goldfrapp inspired synth pop. It was a departure from her acoustic roots and rocky past, but she seemed completely at ease with her dancey new aesthetic.  Worldly 9-piece Blue King Brown churned up a blitzing set of reggae roots and capped it off with an epic medley mashup featuring MJ’s Billie Jean and ACDC’s Thunderstruck to name a few.

Sunday saw a notable decline in punters as 9 to 5ers left for work on Monday. The smaller Syn stage took precedence as a chilled out crowd soaked up sun and the day’s folky offerings.  A flock of barefooted female janglers swayed to the swinging alt-country fashions of Matt Joe Gow and the Dead Leaves.  Folk-pop guru Old Man River urged the lethargic masses to rise, and many broke into dance, unable resist the psychedelic mystique of sitar melodies and the giddy sing-a-long allure of crowd-favourite La.

Another freezing night saw festival goers don quadruple layers and drape themselves in sleeping bags.  Early on Melbourne theatrical rockers Me impressed as something of a Mars Volta and Queen lovechild, with lead Luke Ferris’ crystal voice soaring high and low to the drama of classic piano and vigorous violin.  A monotonic noise-punk set from The Spazzy’s interrupted an otherwise pleasant home straight for Blueprint Festival. Luckily Hungry Kids of Hungary were able to finish with a vibrant bang. The Brisbane four-piece hailed Vampire Weekend with their crisp pop jangles, complete with doses of melodramatic two-part harmonies and a bit of 60’s “do-wop.”  The crowd demanded encore, and the Hungry Kids delivered emphatically with a frenzied cover of the uncharacteristically rock and roll Beatles song I’m Down.

All in all it was a decent first effort from Blueprint. Minor organisational hiccups and cold weather were forgiven for an aesthetically awesome location, magic mud and a musically diverse Aussie line-up.

The following review is done by one of our giveaway winners Yen Nguyen:

Australia has a strong reputation for its music festivals, and it seems that every year there’s a new batch popping up across the country for punters to choose from. The Blueprint Festival is one such festival that debuted this year, held outside of Ararat, Victoria, a town that up until now I was only aware of because of it’s prison. Blueprint is a good half hour out of Ararat set amongst a beautiful country landscape of Canola fields and greenery. The Festival was on the smaller side with two stages; the RRR and SYN stages, (named so for some anonymous sponsors) and featured an all-Australian line up of well known names such as The Panics and festival staples Blue King Brown, as well as a healthy dose of emerging artists. The two stages were spaced only a short walk apart, but with great acoustic separation between the two, so no problems hearing the spill from the other stage when watching an acoustic act. Overall, it was a fairly relaxed festival. There was plenty of space for camping, all of your standard range of festival foods, and market stalls selling knitted beanies, fisherman’s pants and herbal remedies.

Perhaps a reflection of the country Victorian setting, the line up featured a lot of Country-Rock and Blues-Rock acts such as Kasey Chamber’s hubby; Shane Nicholson and, insert dread-locked-slide-guitarist here; Ash Grunwald. One highlight of the country types was Wagons, who performed their brand of alternative-country-rock with a refreshing dose of humour and charisma. Their set included a hip-hop interlude in which their drummer took the mic and busted out a rhyme about “sucking on a big spliff.” Bertie Blackman, was another highlight, bringing some electro-indie-pop to the main stage. Her songs are catchy and lush, made slicker by the pre-recorded backing vocals and backing tracks being triggered alongside her band.

Blue King Brown brought their too-many-to-count-piece line up to an eagerly awaiting crowd, playing a tightly rehearsed set of dub, afro-beat, and latin-funk to a crowd that lapped it up. The band is a group of highly skilled musicians who have also made it their mission to save the whales. They implored the crowd to join sea-shepherd, and to never feel alone when standing up for what you believe in.

Tim Rogers’ solo is distinguished from You Am I as an opportunity for him to play more country and folk oriented tunes. He performed with a full band that featured members of You Am I as well as Violin and Cello. Rogers’ has carved a spot for himself as an icon of Australian music over the last decade or two and he has the talent and credibility to continue in this position for many years to come.

The highlight of the festival for me was definitely The Panics, who have recently returned from a tour of the UK with Paulo Nutini. The Panics know how to write songs with quality lyrics and inescapable hooks as they demonstrated in a set that mostly featured songs from their album “Cruel Guards,” as well as a few oldies thrown in. Another case of the backing track featuring heavily on their performance of “Don’t Fight It,” but what is that song without the horns? I’m told the band are currently working on re-releasing “Cruel Guards” in the UK in an effort to reach overseas audiences. For my money, The Panics are definitely one of our best Australian bands and I wish them all the best in their overseas conquest.

For those that wanted a break from the big name Triple J acts, there were plenty of emerging talents on the SYN stage. Saturday night was very, very cold in the tent, and made a little concerning by a bogan who had parked his ute facing directly at us. This guy kept revving his engine and beeping his horn well into the wee hours. Festival goers may have seen this guy before, he has peroxided dreadlocks, sunnies at all times, carries a tinnie and answers to “Robo.” He often hangs out with “Micko” who has a white-boy fro, a wife-beater and wears the Australian flag as a cape. These two can be found sitting outside their tent, blaring Aussie Hip-Hop out of their car and ringing Rosie at Triple J to request “The Festival Song” by Pez. I didn’t see these guys checking out much music during the festival, but they suddenly appeared during the Funkoars set and seemed to have multiplied greatly in number.

Blueprint has the makings of a good festival, and once they’ve ironed out a few problems of their first year (like getting the shuttle busses between the festival and Ararat to actually show up), they’ll make a fine addition to the Australian festival circuit. 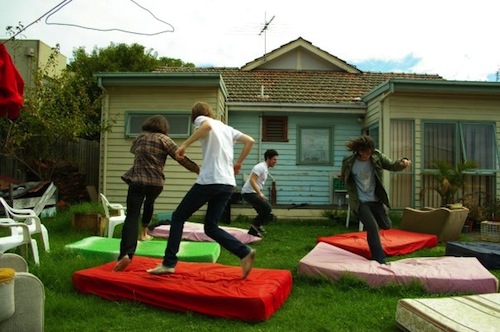 With a level of DIY grace, these guys master ticklish, shiny melodies enmeshed with fresh, quirky electro rushes. Communal yelps and harmonies adorn Dave Connor’s excitable, and brilliantly childish, vocal lead. And if Dave is the driver, younger brother Andrew, arched eagerly over his drumset is the ceaseless engine. The man needs no seat. He’s Mickey Mouse in Fantasia, commanding those steal drums like he knows how.

Meanwhile, Justin Schacter and Lloyd Pratt provide the middleground, smoothly yet unpredictably utilising a bass, a casiotone and a laptop to emit sonic funtimes. Instrument swapping is rife as the mood builds from pensive to rampant to euphoric, but the transition is somehow natural and appropriate.

Earlier this year they supported their hero, the one-man-party-starting Dan Deacon, and they posses a similar ability charge crowds into masses of vehement giddiness. That got them some considerable momentum, landing them a residency at The Birmingham and more gigs than they knew what to do with. But alas, Lloyd, praised techgician, disappeared to Europe with a backpack leaving a deep and lonely void in the soul of the band. They even set up a We Miss Lloyd website.

So Lloyd gets back next Friday, and the band, eager to resume their upward trajectory, have a string of Melbourne gigs, and a La Roux support in Sydney.