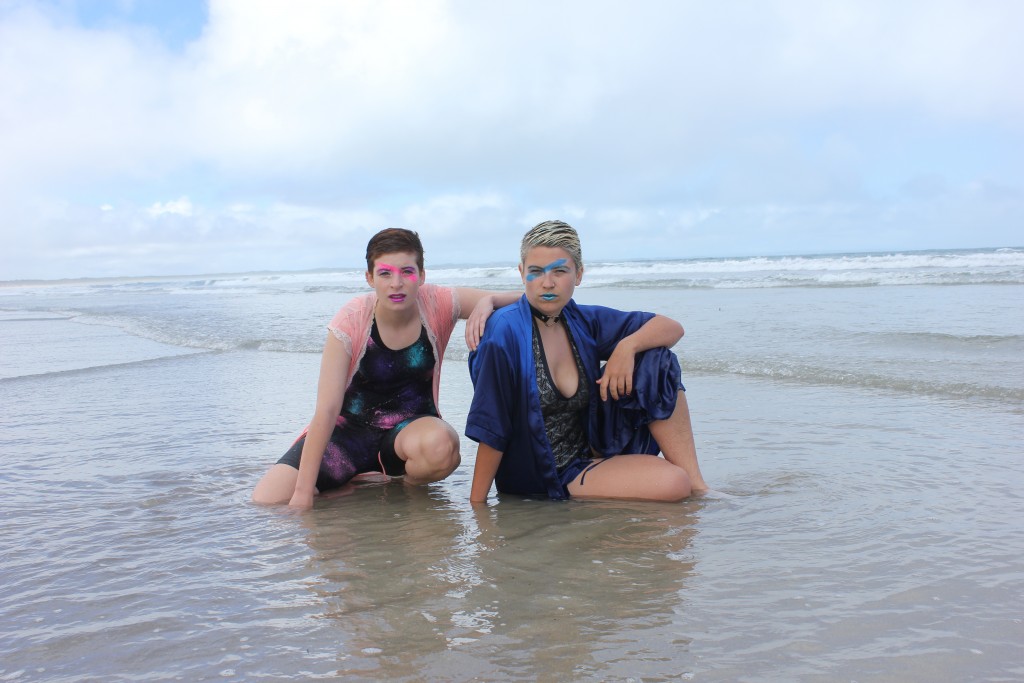 Too many babes is a great problem to have. A great problem until you become physically overwhelmed at the site of beautiful people you want to sex so much that it hospitalises you. Then it’s definitely a problem. Jess and Em descended from Shag Planet not a moment too soon, chucking a synth and a wood block under that sentiment to regale us with the tale of a young woman’s truly explosive sexual awakening in their debut single ‘Too many babes, too little time’. The Melbourne (Victoria, Australia, Earth) duo describe their intergalactic pop as “cosmic bangers”. I don’t disagree.

There’s a crunchy guitar hook, lo-fi synth with some astral sounding effects and howling backing vocals in a slightly less developed synth punk of their LISTEN labelmates Stina Tester & Cinta Masters. The star of the dish here is really the narrative that hooks you from the beginning, you simply must find out how this woman escapes the clutches of monogamy. Without spoiling the ending I sincerely hope no one is currently so sexually repressed they meet the same fate as Shag Planet’s hero. Or that they have to leave this planet to feel comfortable with their sexuality.

Basically this track is fun as hell and 200% going to be stuck in your head for the next few hours (days, if you’re lucky). Prepare a response for when you accidentally begin to sing “toooooo many baaaabes, too little time” at random intervals in public, so far no one has been convinced that really I’m just singing an incredibly catchy song, no it’s really good, please, don’t tell my boss.
Shag Planet will be attempting to woo as many of you as humanly possible at the Old Bar in Melbourne on June 25th when they launch the single. Scott the paramedic will be on hand should babe-frenzy related medical assistance be required. 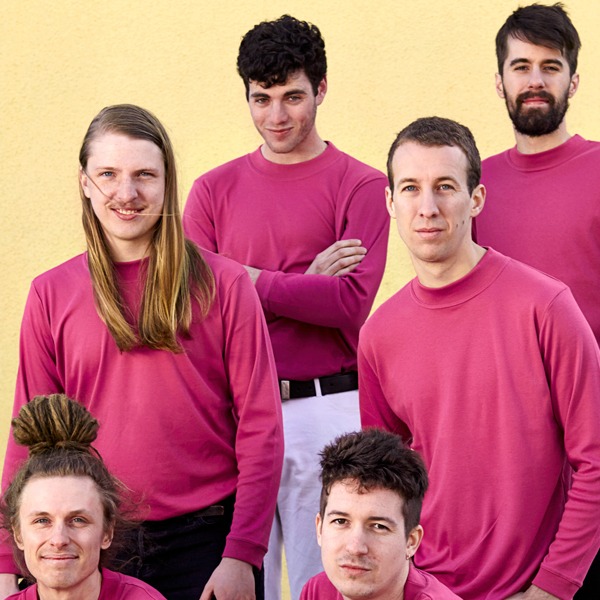 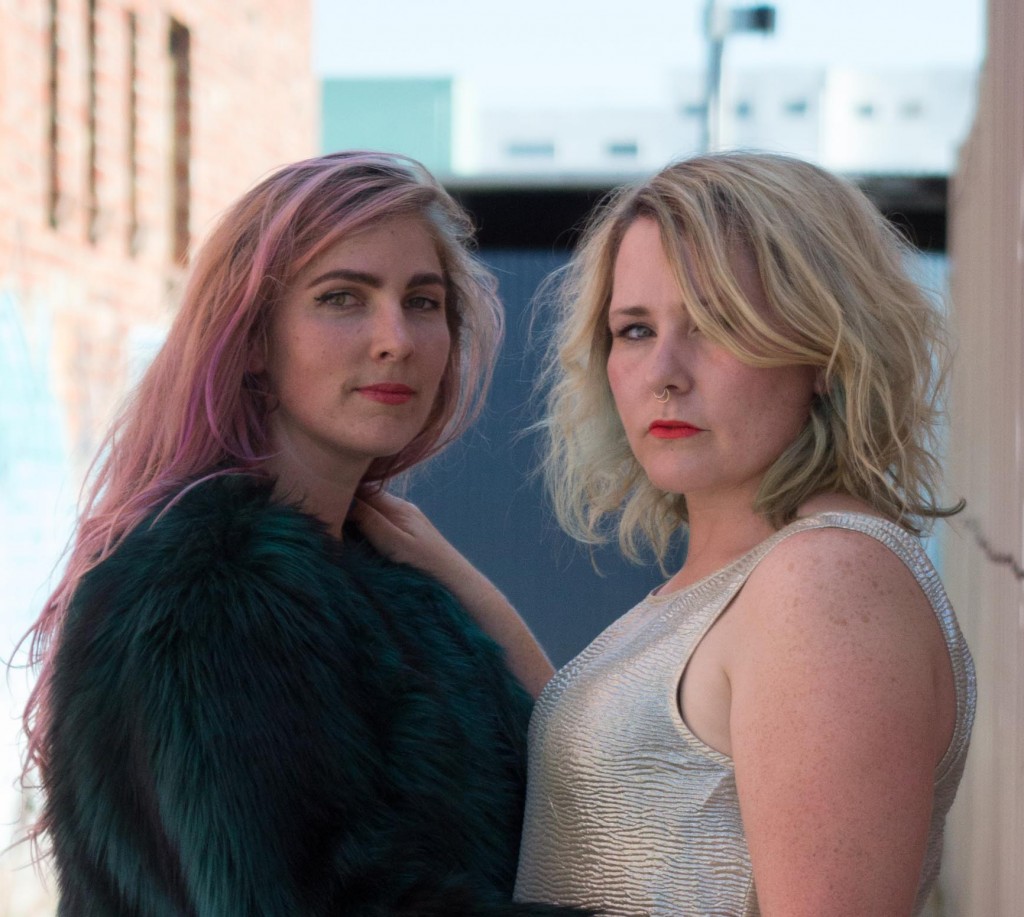 Stina Tester & Cinta Masters have blessed us with a few singles already, independently and through LISTEN – all heady mixtures of agitated synths, propulsive rhythms and pointed, abrupt vocals. Their latest single, ‘Mystery’, brings no relief, and I don’t actually want to be relieved from the pair’s tightly wound synth punk. News of a debut album from Stina Tester & Cinta Masters is a stark dystopia I can get behind.

The ladies have been dishing up music together for a while now, putting stuff out as Gold Tango until 2013. After retiring that moniker, they continued to work together, culminating in the forthcoming LP. If you’re like me and will listen to anything punk-flavoured without going the full thrashy milkshake, Stina and Cinta offer an angular compromise. Dissonance and punchy keys are softened by consistent drumming and reliably melodic – but in no way soothing – vocals.

No, really – if you like pokey synths and tense atmospheres, pencil this release in for 1 April, out through LISTEN Records. They’ll be launching the album on 8 April at the Curtin in Melbourne with Empat Lima, Simona Castricum and Shag Planet (aka three bands you need to Google right now and educate yourself). 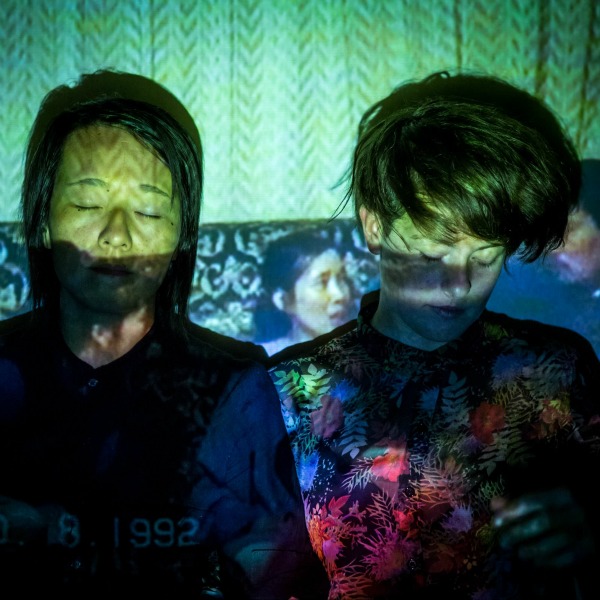 Melbourne duo Tina Nguyen and Amy Wright aka Beloved Elk have just landed ‘The light of dead stars’, a dark, lilting alt rock track with a fittingly melancholy film clip to boot. Footage “made in our shed” and frames from family movies of the girls respective childhood cuts away to a spotlight moving through tall grass, searching, revealing and being generally apprehensive.

Two-piece bands have a habit of over-compensating with sound for their lack of womanpower, but not here. ‘The light of dead stars’ sees Nguyen and Wright fit snugly with one another.  The light, accented, guitar hook and more hi hat than kick drum produce a restrained balance. It’s a stripped back version of their last EP’s sound which sees Wright’s vocals stand in equal stead with Nguyens tight rhythms, with the vocal melodies mirrored in the guitar lines.

The new track carries an ominous weight, the source of which is difficult to pin down without the clip’s help. Neatly compressing angst is a serious endeavour, and Beloved Elk make music that requires your full attention without being draining. 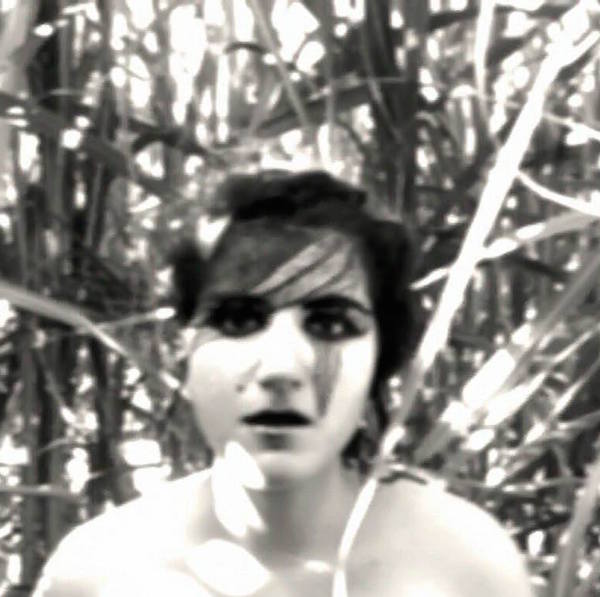 Julia R. Anderson began uploading bedroom experiments to Soundcloud during her high school years in the sweaty Queensland town of Bundaberg, aka that place where rum and your worst decisions come from. Anderson has since made the southward trek to the Big City Light of Brisbane to study music, all the while tinkering away at her unassuming swirling psych sound, and her ability to move from across the psych spectrum from folk to garage is proof the constant development is paying dividends.

‘In the Beginning’ is Anderson’s first proper release and continues very much in the same vein of her sizeable Soundcloud output to date – it’s music to daydream to. The video is exactly what I wanted it to be: a lush, strange trip through the park, featuring body craft and snippets of singing birds chime in behind her own confident drawl. I’m coming up stumps trying to think of Australian female vocalists with a similar sound, but I can definitely hear a bluesier Melody Prochet, the French artist behind Melody’s Echo Chamber.

‘In the Beginning’ is the first look into her debut album to be released next year, which will consist of a selection of old favourite from her Soundcloud page and new music and I’m hoping the infectiously upbeat dream folk track ‘Learn and Play’ makes the cut. It shows off Anderson’s ear for detail and feels as though it’s been composed from whatever musical bric-a-brac was on hand at the time of a creative burst. There is a hazy summer optimism about the song that holds your attention with it’s bubbling positivity where ‘In the Beginning’ loses a little steam.

Whatever your take Anderson has plenty of material to rummage through, and by the sounds of it 2016 will only see the proliferation increase. 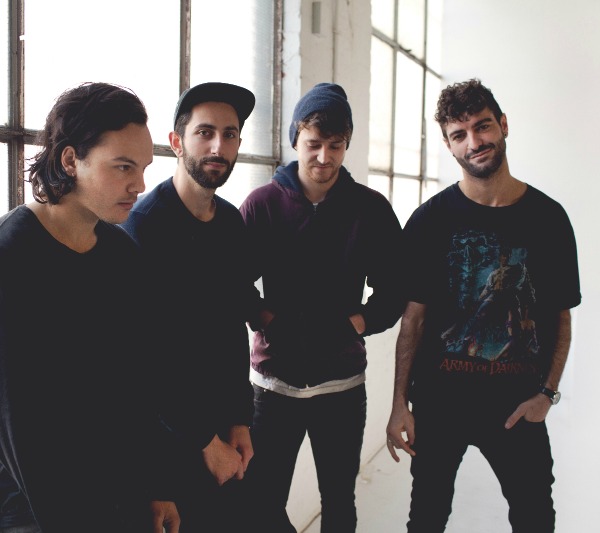 Let’s be clear, any rock song that can recall my years as a closet emo teen will instantly have my cold black heart – no matter how tenuous the connection. And this is pretty effing tenuous. Still, the light dusting of reverb on the opening riff on the latest single from Melbourne four-piece Neighbourhood Youth – ‘For Nothing’, coupled with the morose, hollering vocals were enough to get my attention (but I decided against punishing my face with eye-liner). This bustling guitar rock track is propelled by leading man’s solid vocal work with definite singalong infectiousness.

Aside from the obvious indie rock cred Neighbourhood Youth are channelling, the opening riffs remind me of the hooks off the last Title Fight LP. The melancholic undercurrent of the track reveals itself in the guitar melodies, and the band clearly have a grasp on how to construct a driving alt-rock song. It will be interesting to see how they expand on their ideas in their second EP, due out early next year.

It’s the kind of track that I want to see live as soon as I hear it, there’s a bubbling energy throughout that makes me think the guys would put on a sweet show. Melbourne Music Festival thought so too, slotting the boys in prime position alongside World’s End Press, Tiny Little Houses and Foreign/National last week.

Catch Neighbourhood Youth in the 11:15AM Saturday slot at Paradise Festival this weekend. 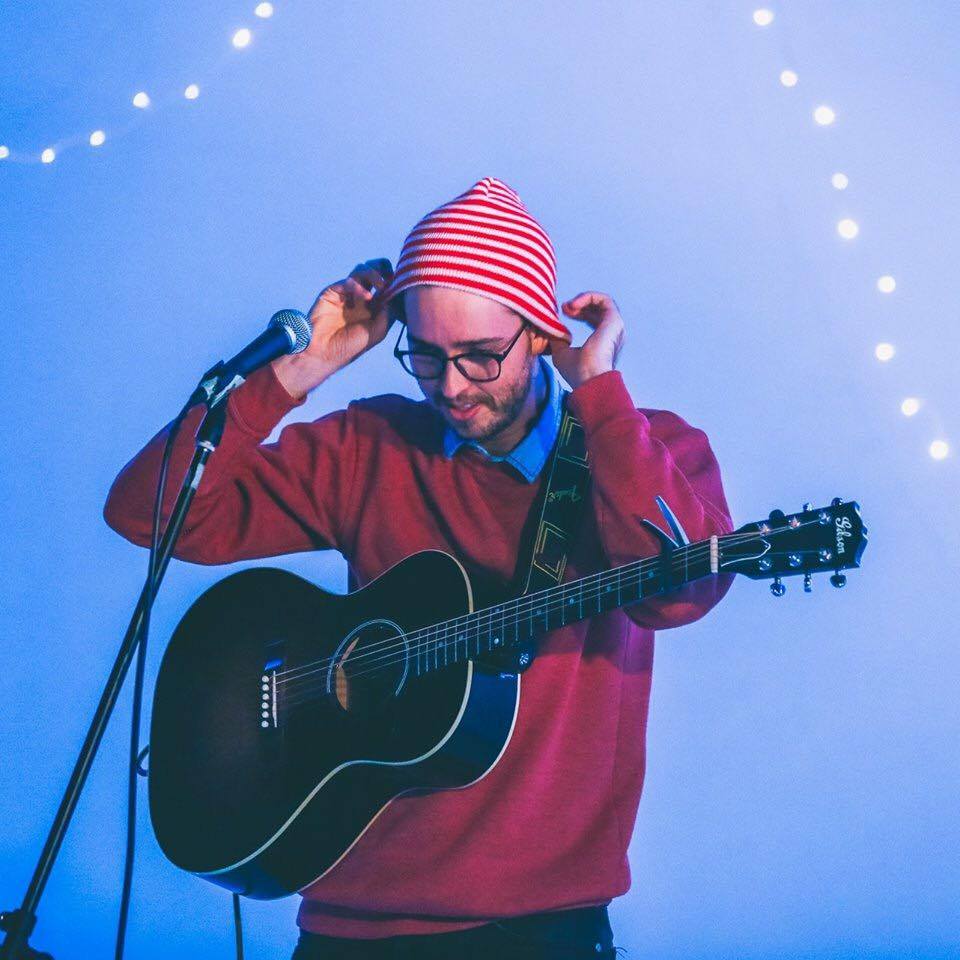 Fuck off John. Seriously, stop terrorising Max Quinn’s neighbourhood. Actually after listening to ‘Waterloo’ (named after the inner-Sydney suburb) I think I’ll be just fine here in Brisbane, thanks. Max Quinn has artfully turned his ‘povo urban youth’ experience into a neat slice of alt-pop punk on the first track from his forthcoming EP Carpool Tunnel Syndrome (a disease which I actually thought existed after many years of sympathising with Sharon Strezlecki because I thought she was heaps stressed from driving Kim around everywhere until someone corrected me: “car-pal tunnel, idiot”).

‘Waterloo’ wastes no time with bells, whistles or indie BS. It’s straight up story-telling, backed by a very listenable band. Perhaps Quinn’s hinting at a more direct approach to this EP, with his 2014 self-titled mini album (which was actually recorded in the residence that provided the inspiration for ‘Waterloo’) a pretty playful release full of offbeat quirks. Quinn is a witty song-writer – his lyrics move at a stream-of-consciousness pace without disappearing up their own butt in metaphors or becoming one-dimensional cliches.

It’s no surprise that the narrative is the real hook in this track, and the instrumentation gives Quinn’s story plenty of space to move. The vocal harmonies and layered guitar lines nail their job – you barely notice them at all because you’ve been swept up in all the hubbub and are busy screaming “fuck awff Jooohhhhhnn.” I love a good reverb soaked psych-wank as much as the next 22 year old, but Quinn’s sound is refreshingly earnest and I eagerly await Carpool Tunnel Syndrome.