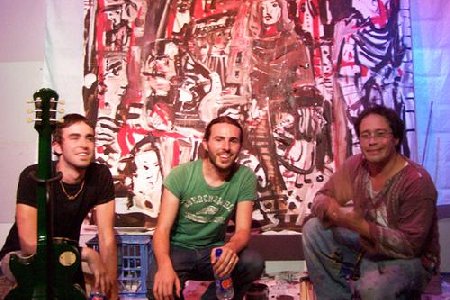 Despite the trio in the photo, Karoshi is the brainchild of one Sydneysider, Beres Jackson. Before I unveil a blog full of flamboyant musical adjectives, I’ll take a quick snippet from the Karoshi MySpace:

“The name Karoshi comes from the Japanese word for ‘working oneself to an early death’. This social commentary is the idea behind the songs on Karoshi’s debut EP, but there is also a feeling of hope and beauty behind the darkness.”

There’s something almost Barbra Streisand about the introductory keyboard on ‘Slowdown’; a tone that harks back to the synthesised pop of the 1980s. But that’s a moot point considering there’s nothing pop, nor ’80s, about ‘Slowdown’ or in fact any of the songs found on the debut Karoshi EP. Psapp, Decoder Ring and Boards of Canada are reference points for Karoshi’s brand of instrumental, downbeat electronica. Scattered drum beats, softly-spoken keyboards, beeps that twist and turn and ambient beds of soundscape all overlap to create something rather beautiful.

Tracks on the rest of the EP include some other instruments, as well as vocals on one track. While Karoshi live shows have been limited, Beres is currently traipsing across the globe, so there’s no shows for a while. In that case, you should grab yourself an EP for those peaceful late nights.