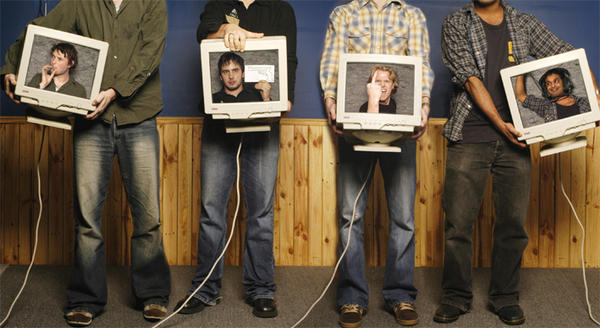 But lately we’ve been receiving a lot of emails from non-Aussie acts wanting to be featured. Yes, your eyes do not deceive you kind reader – on a blog that features only Australian and New Zealand music, bands from America and the UK believe they can be featured too. Please, if you’re one of these people, do us the courtesy of reading the blog before flogging your wares to deaf ears. We don’t hear any music that’s not Australian or New Zealand. Seriously. It’s a rare medical condition.

Now back to your regular programming…

Come the turn of the century, Australia’s musical epicentre moved westward when, perhaps with the proliferation of the internet and MP3s, the usually insular and distanced Western Australia began to unload a barrage of top-quality pop rock acts upon the scene: Eskimo Joe, The Panics, Sleepy Jackson and The Panda Band were just a small number of bands who were coming out with a sweet, idiosyncratic Perth pop sound.

Red Jezebel is another group worthy of illumination. ‘Lost My Gun’ is a cut from their new record How I Learned to Stop Worrying, a track that is equal parts Tom Petty & The Heartbreakers and Ryan Adams-esque alt country. Dirty Fender guitars crunch in the background with strummed acoustic guitar chords while sweet, harmonised, Sleepy Jackson-esque vocals and tinkling piano hold the melody up front.

Arresting sounds from the wild West.