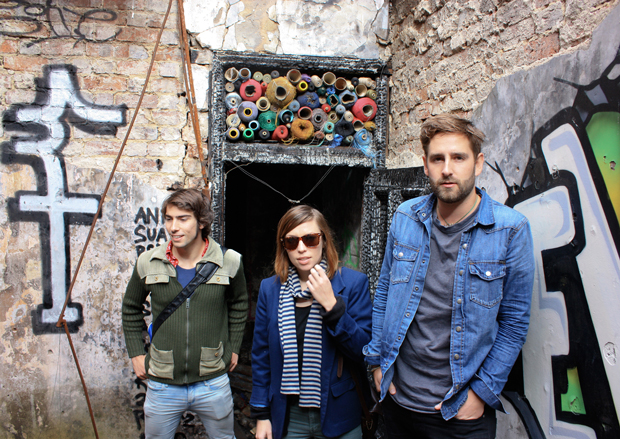 Alright, way past the point of trying to conduct interview questions that try to sound probing, intelligent or chummy, so we left Justin Debrincat (Kingswood), Michael Cini (Money For Rope) and Leigh Ewbank (Damn Terran) to amuse themselves and conduct their own Q&A under the thematic banner of their upcoming joint tour, aptly (and perhaps questionably) named ‘THIS EPIC TOUR’.

MOST EPIC GIG YOU’VE BEEN TO.

JD: Stop saying epic please. It would have to be either Reece Mastin live at Westfield shopping centre or Fleetwood Mac at Rod Laver.

LE: I don’t think I’ve been to enough to pick one truly epic show. Notable gigs that come to mind are Sonic Youth on the Daydream Nation tour, Faith No More’s reunion, and of course, Meredith.

MC: Kevin Bloody Wilson at the Millers Inn, Altona. I was only 14 so it was pretty epic. I’m sure my parents thought I was at my cousin Mark’s for the night.

JD: Please stop saying epic. At the moment, Shut up and Kiss Me (which is only a single) by Reece Mastin, or Rumours.

MC: The Best of the Worst, Kevin Bloody Wilson. I was only 11 at the time. I bought it with a Sanity voucher I got from my cousin Mark. It’s the only album I’ve ever had confiscated. After 3 years i found it in one of the family photo albums. The White album isn’t bad either.


MOST EPIC HOUSE PARTY YOU’VE BEEN TO.

JD: Corona House in Byron Bay. Look it up.

MC: I’ve been to a few epic parties, it’s kind of hard to narrow it down. I’ve witnessed peopled falling through roofs, people jumping off roofs into the greenery waiting below, been involved in and also witnessed sex in confined spaces, witnessed parents arrive home early and walk through their once shiny tiled corridor now coated in teenage mud and Carlton Cold beer, I’ve even witnessed scummy crew rip bongs that are as high as I am tall.

But the cake has to go to my mate Sykes. His three story party in St Kilda ended with an unexplainable riot squad (I never saw the violence) and 8 of us attempting to paddle home across Port Phillip Bay on a pallet, using 3 recycle bins for buoyancy and give way signs as paddles.. Fail.

LE: In terms of duration Meredith is always long haul. In terms of local parties there was a warehouse party on Johnston St a few years ago which was BYO. It ended up getting so packed the party spilled out over the street and inside was kind of a death trap. I remember there being a dead tree inside and a pile of soil with grass growing on it.

JD: Geelong waterfront to six 8 year olds and their parents, in Geelong. One kid said we sucked. Doesn’t get much more ‘epic’, as you like to say.

MC: Most definitely Boogie5, 2011. We rigged up a generator on the Sunday morning at 3am at our campsite. You had to be there, just ask the 400 people that bombarded our campsite. Our guitarist Carl had an epic stack that night too… Hang on, that stack could have been last night.

LE: It would be a tie between the Sydney and Melbourne shows Damn Terran played with Children Collide and DZ Deathrays last year. Melbourne might just be a more memorable experience because it was at The Corner Hotel. It was awesome to be on the same stage as some of my favourite artists, such as Secret Chiefs 3 and Brant Bjork.


WHAT FILM EPIC WOULD YOU LIKE TO BE IN?

JD: I don’t really want to be in a film to be honest, but if forced, it wouldn’t be epic, because as I said earlier, I’m not a fan of the word epic. I’d go romance. Because I’m a romantic.

MC: Dumb and Dumber, only because Rick and I can’t stop quoting the movie everywhere we go. Maybe being in it will get it out of our heads. Oh yeah, and who wouldn’t want to be a driver in the Godfather or Sopranos? I’m part Italian.

LE: With all these questions I’m starting to regret being on ‘This Epic Tour’… Limiting myself to films that could be described as ‘epics’, Lawrence of Arabia. Why? Because I love the desert and I’ve always wanted to see the Wadi Rum and the Seven Pillars of Wisdom.


WHO WOULD PROVIDE THE EPIC SOUNDTRACK TO YOUR LIFE?

MC: All I know is that you’ll be crying and Kevin Bloody Wilson would have a secret track in there somewhere.

LE: Mmm… There would have to be a diverse cross section of music to cover all of the bases. If it was a compilation it would feature (off the top of my head): Talking Heads, Death Grips, Brant Bjork, Joy Division, Bjork, Nirvana, The Mark of Cain, and Yawning Man.


WHO IS THE MOST EPIC PERSON, EVER?

LE: In recent times it’s hard to look past the iconoclastic Frank Zappa. In just over three decades Zappa amassed an epic catalogue of compositions, released dozens of albums across the genres, performed thousands of shows, produced films, published an autobiography, debated right wingers on TV, testified to the US Congress, and was even a trade consultant to Czechoslovakia after the collapse of Communism. Zappa was a pioneer in every endeavour. The samurai Miyamoto Musashi and abolitionist Frederick Douglass are two other epic figures I find interesting.

MC: Hmmmmmmmmmmmmmm. Jules Mckenzie. His tunes and his bikes are so damn epic. He’s a Hawthorn supporter though, I don’t know about that.

LE: That would be me. I once tried to jump a tree stump and ended up with a branch up my arse. My good mate Kara knows what I’m talking about. My other fail was an epic stack on my skateboard while racing my mate when I was 16. It resulted in a broken wrist and a brain haemorrhage. This is the ideal place to insert a safety message to kids about the importance of wearing helmets while performing daredevil antics.

JD: The name of this tour? No I’m kidding. But seriously, we did get outvoted.


Damn Terran, Kingswood & Money For Rope are touring through June and July. 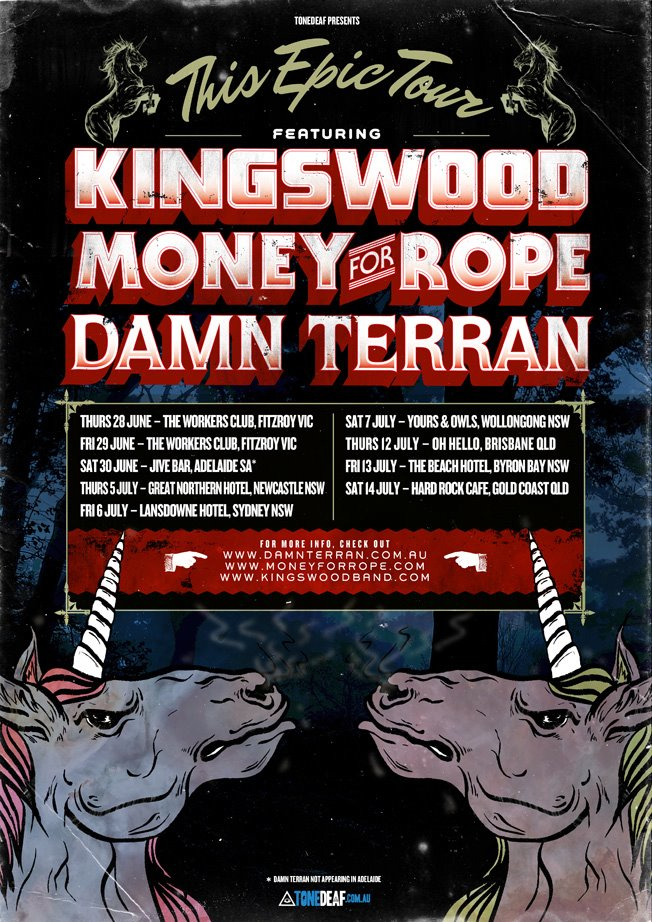