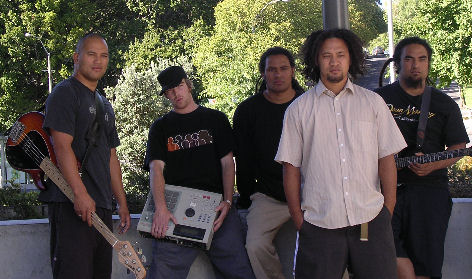 I’m not sure if Darwin could explain it, but for some reason Kiwis have an innate sense of dub and reggae – think Salmonella Dub, Fat Freddys Drop, Katchafire and The Black Seeds. It’s even got its own Wikipedia entry!

Kora stand out from the pack because they infuse their music with a heavy dose of rock and funk; they’re the support act for the upcoming Cog album launch tour, which demonstrates this band’s major crossover appeal. It’s a great album for someone like me, who has more of a rock background but has always enjoyed dub music. It’s a very diverse record, traversing dance, dub, hip-hop, rock, soul and funk landscapes, always maintaing a wicked, infectious groove.

‘Burning’ is the opening “song” (barring the Lord of the Rings-esque cinematic epic ‘Intro’ on track 1) and a tune which I think best represents this album. I was going to put up the tounge-in-cheek tune ‘The Delivery Man’ because it’s just so damn funky, but I think I’ll put that one up later. If you’ve never heard Kora before, that song might not give you the right impression of the band. ‘Burning’ however is just so naturally groovy that you can’t help but bop with it.

Leave a Reply to Adrian Whitney