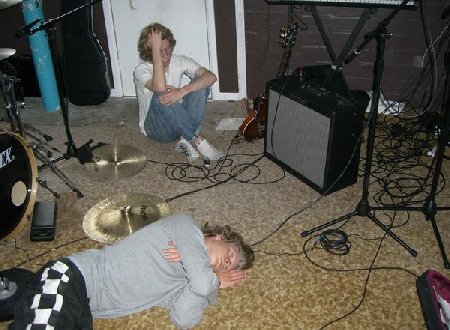 Sure, it’s early in the morning – much earlier than I’m used to writing a blog post, may I add, so the cogs in my head aren’t turning at full speed just yet – but did I miss something here? Let me take you back for one minute…

Thursday night. Hopetoun Hotel in Sydney’s modish Surry Hills. Ostensibly I was there to catch the Firekites, whose album I’m completely smitten with, but when I walked in a young five piece from Wollongong by the name of Lola Flash were playing a subdued, yet strangely hypnotising, set to a crowded room. (OK, so 10 people in that pub could be considered ‘crowded’, but there was a decent sized audience in attendance.)

Fast forward to now. After undertaking my ritual pre-blog internet trawl for MP3s, images and info, it seems that the teenage brainchild behind Lola Flash is Emma Russack who’s some sort of internet meem!! Where have I been?? Her steely-gazed, almost pseudo-sexual YouTube clips, performing covers of Neil Young, J.J. Cale and Echo and the Bunnymen have amassed a staggering amount of hits, but none more than a clip of her own song, ‘Swimming’, which is closing in on one million clicks (clip at the bottom of this post).

So why all the attention? Her (and Lola Flash’s) lo-fi, melancholic brand of Cat Power-esque pop has an emotional depth and maturity that belies their low age average, or perhaps its the unabashed brashness and bravado in which they pull off their music. The promo photos of members of Lola Flash pashing each other is an uneasy aside to their impetuousness.

But, perhaps more than anything to do with their age or attitude, just like it was on Thursday night, their music houses a haunting, ethereal quality that’s both subdued and hypnotising. Nothing about Lola Flash’s music is extravagent: from the Dirty Three-style violin to the scattered drumming, the reticent vocals to the unassuming guitar lines, no musician is jostling for the spotlight. Everyone knows their place in the Lola Flash universe and the end result are sublime musical nebulas.

Here’s Emma’s video of ‘Swimming’. Check out how intensely she stares at the camera like she’s looking into your soul…. well, maybe not. The measure of a video’s success are the number of responses and “remixes” done to it, so check out YouTube for some extra ‘Swimming’ action.